The Origin of the Communist Regime: From «Republic of Soviets» to the One-Party Dictatorship. Part 2 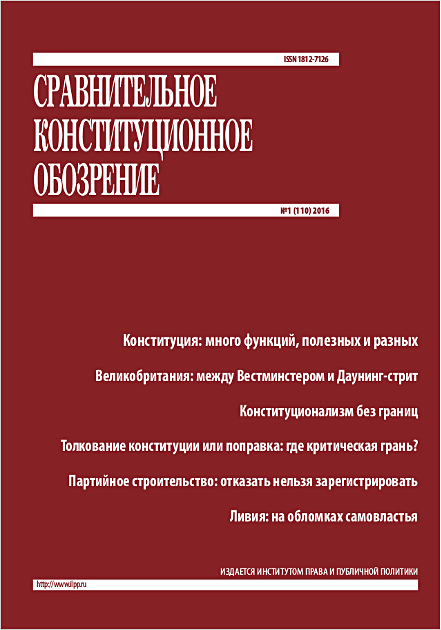 The origin of the Communist regime remains the focus of acute debates not only for historians, but also for politicians and legal experts in the context of Soviet legacy and the formation of the transitional Post-Communist regime. The widespread myth about Soviets as integral institutes of direct democracy still inspires leftist ideological proposals and even has significant impact upon constitutional amendments to Russian Constitution of today. The author analyses the place of Soviets as traditionally motivated institutes in the political structure of the Bolshevist regime, their impact on radical transformation of political culture, electoral system and local selfgovernment organization. He reveals the fundamental contradiction between new constitutional provisions and the process of decision-making in one-party dictatorship in formation. The special subject of this investigation is to reconstruct different positions in the party elite on constitutional disfunctions, and prospects of legal and administrative reforms. Alternative concepts of Soviet system as represented in political debates of the early post-revolutionary period are informative for understanding of the longterm trends of its evolution and general causes of its historical failure. Demystification of the Soviet legend is only possible by the profound research of its genesis and real role of Soviets in revolutionary governance system. On the basis of the 1918 Constitutional Commission archive documents the author makes a reconstruction of the historical place of the Soviet phenomenon clearly showing how far its «democratic» potential was from the deceptive ideal as it appeared before the eyes of masses.

Rashin A. G. (1958) Formirovanie rabochego klassa Rossii [The Formation of the Working Class of Russia], Moscow: Nauka. (In Russian).