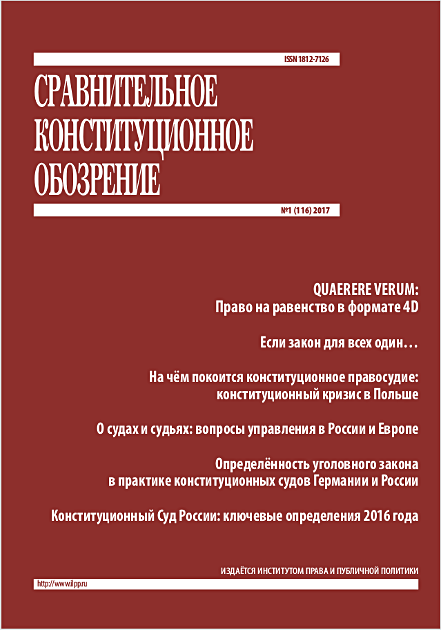 ARE ELITES THEMSELVES READY TO COMPLY WITH THE LAW?

The article examines the problems of the public and government components of the anti-corruption policies. The author draws attention to the fact that the results of the various constitutional and legal means to struggle the corruption depend on the peculiar conditions and the situation at the so called “corruption market” in the country. However, the effectiveness of measures to prevent and suppress corruption is predetermined by institutional forms of the state mechanisms of selection and recruitment of persons for positions in the executive bodies. In the United Kingdom the mechanisms of selection of candidates for senior public position are characterized by transparency and based on meritocratic principles.

QUAERERE VERUM: HOW TO PROMOTE THE RIGHT OF EQUALITY?

The limitations of a formal interpretation of the right to equality are now well recognized. However, the meaning of substantive equality remains deeply contested. Some of scholars think that equality is an idea that should be banished from moral and legal discourse as an explanatory norm. Another part of the learned community holds that the right to equality does not go far enough. Even if equality before the law has been established, disadvantage persists, and this disadvantage tends to be concentrated in groups with a particular status, such as women, people with disabilities, ethnic minorities and others.

The article addresses the management problems in the judiciary and the organizational issues of internal administration of courts and Russian justice system as a whole, as well as external factors influencing organization and work of the courts. The paper analyzes the procedure of forming the institutions and personnel of the judiciary, the recruitment of judges including the occupational requirements for judicial position. In this context, the author also researches professional selection and guarantees of independence and impartiality of judges, considers the procedure of appointing the court chairperson, powers and administrative functions of the head of the bench.

This review is based on surveys delivered at the international round table meeting held in Moscow, at the Institute for Law and Public Policy in collaboration with the International Commission of Jurists, on September 26, 2016, on the state of the judiciary in a number of member countries of the Council of Europe. The review includes theses of judges representing three CE countries – Italy, the Netherlands and Norway. The central theme of the discussion, running like red thread through the reports of all speakers, was the independence of the judiciary and judges as well as the right to a fair trial.

The article compares approaches to the principle of legal certainty employed in the jurisprudence of the Federal Constitutional Court of Germany and that of the Russian Constitutional Court. Since the problem of legal certainty is not limited to criminal law alone, the author’s analysis is not limited to criminal cases. In some way, uncertainty in criminal law is inevitable due to the general nature of the law language – unavoidable use of generalizations, its brevity and conciseness. Nevertheless, the legislator is responsible for drafting legal norms as clearly as possible in order to prevent arbitrary court decisions. Thus, the principle of legal certainty sets requirements not only to the law enforcement, but also to the law itself.

REVIEW OF SELECTED RULINGS OF THE RUSSIAN CONSTITUTIONAL COURT IN 2016