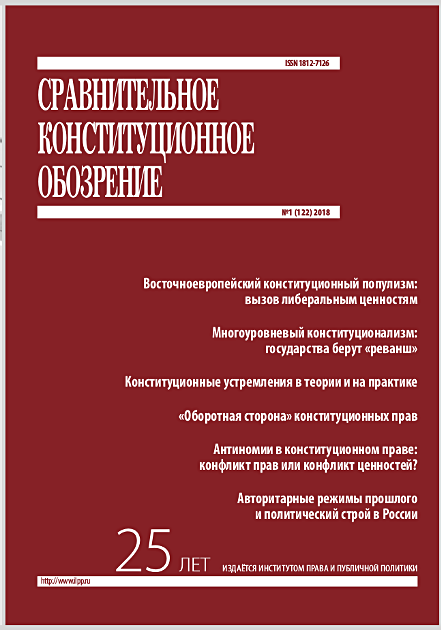 This article examines the logic of constitutional transformation in countries of Eastern Europe and Russia during the period which started from the fall of Communism in the 1990s and up to the most recent legal and political upheavals. Without question, the initial liberal impulse that inspired the whole democratic transition in countries of the region has been dissolved and substituted by a new conservative political orientation rooted in feelings of alienation, disappointment, inconsistency, and aggressive nationalistic reaction to constitutional modernization. Why has this new trend become so visible in political life and so influential in the current agenda of constitutional counter-reforms, and where are the natural limits for its fulfillment? In order to answer these questions, the author proposes a conceptual framework: a theory of constitutional cycles that reveal the dynamism of legal transformation as the shift of social priorities from the abandonment of an old constitutional model to the reception of a new one with a subsequent phase of constitutional abeyance that potentially could result in a more or less visible restoration of traditional forms and methods of constitutional regulation. This big constitutional cycle is coming to its end in Eastern Europe and Russia, making relevant the analysis of such phenomenon as constitutional re-traditionalisation (or re-constitutionalisation).

THE SOVEREIGN STRIKES BACK: A JUDICIAL PERSPECTIVE ON MULTI-LAYERED CONSTITUTIONALISM IN EUROPE

This article covers current trends in global constitutional development. For many years, so-called multilevel or multi-layered constitutionalism achieved remarkable progress. New supranational actors were established that received various competencies from nation states via delegation. A typical example of this was the creation of international courts for the protection of human rights, the best known of which is the European Court for Human Rights. Another well-known example is the project of European integration that resulted in the establishment of the European Union. However, the process of transferring competencies to supranational institutions has shown a dip in progress over the past few years because of the opposition of some states. An important reason for refusing the further internationalization of constitutional law is to preserve the so-called constitutional identity of these nation states.

The article presents a study of a particular group of constitutional norms which define fundamental values and aspirations of a political community. Aspirations which are usually found in constitutional preambles and chapters devoted to basic features of constitutional order are analysed from two perspectives. Firstly, the authors describe theoretical approaches to understanding peculiarities of aspirational provisions and factors shaping their development. Secondly, they turn to uncovering the potential and challenges of pragmatic use of aspirations by constitutional courts. Aspirational provisions name and describe fundamental values of a community and thus, play a crucial role in establishing its constitutional identity. It is argued that values expressing identity construct a bridge between nation’s past and future, and stress the importance of preserving long-standing legal traditions as well as transforming legal system to achieve certain goals.

IS THE GLASS HALF-EMPTY OR HALF-FULL? INTERFERENCE AS A FORM OF CONSTITUTIONAL RIGHTS’ LIMITATION

CONFLICT OF RIGHTS AS A RHETORICAL ANTINOMY

When judges adjudicate cases in light of national constitutions or the ECHR, they often deal with the conflict of individual rights and have to perform a “balancing exercise” to justify their choice in favor of one of them. Different methodologies can be applied to investigate the problem of why judges make different choices when they counter-balance seemingly the same rights under similar provisions. In this article, an attempt is made to apply the methodology of new rhetoric, elaborated by Perelman and Olbrechts-Tyteca. Legal positivism cannot provide the answer of how the choice is made if the conflicting rights belong to the same level in the hierarchy of legal sources. This issue lies rather in the realm of rhetoric than in the domain of legal theory, because the “preferable”, “choice”, and “adherence” are philosophical rather than legal terms and relate to values and hierarchies. Arguments in law, according to Perelman, are rhetorical by nature and decision-making in law is based on rhetorical demonstration, not on the principles of formal logic. The choice between two lines of arguments is always a value-choice, and can be grounded in public opinion as well as in the moral choices of the judges.

AUTHORITARIAN REGIMES OF THE PAST AND THE RUSSIAN POLITICAL REGIME: SIMILARITIES AND DIFFERENCES

This article contains a comparative analysis of the political regime in Russia in the context of the authoritarian tradition – namely, the formation and the genesis of some political regimes in the 20th century. The subjects of the comparison are some instruments of political regimes in Latin America, the South-Eastern Asia, and in Russia. For instance, the dominant political party (like United Russia in the Russian Federation, Golkar in Indonesia, the Party of the National Renovation in Brazil, and some others), the party system, the legal system, especially the different models of influence of the executive power to the courts and the role of the state mass-media. The author takes into account the experience of the political regimes of some member states of the CIS – Azerbaijan, Belorussia, Kazakhstan, Turkmenistan, Tajikistan, and Uzbekistan. The author considers the presidential model of power in the constitutions as one of the factors of the authoritarian tendency. The special subject of the investigation includes some unique features of the political regime in Russia, connected with its strategy in foreign affairs.

This article offers a review of legal measures introduced in Russia to address the consequences of the unpunished crimes of the Communist regime in the context of international standards of transitional justice, including those provided for in the Updated Set of principles for the protection and promotion of human rights through action to combat impunity and in the UN General Assembly Resolution 60/147 “Basic Principles and Guidelines on the Right to a Remedy and Reparation for Victims of Gross Violations of International Human Rights Law and Serious Violations of International Humanitarian Law”, it shows strengths and weaknesses of the Russian model of transitional justice, as well as legal impediments to restoring justice and the means to overcome them. The main achievements are in the field of individual measures of satisfaction and restitution of personal and civil rights, while compensation of harm suffered and restitution of violated property rights have been implemented only in a limited way. Criminal prosecution of those responsible for political repressions, truth-seeking mechanisms, and guarantees of their non-recurrence have not been introduced at all.