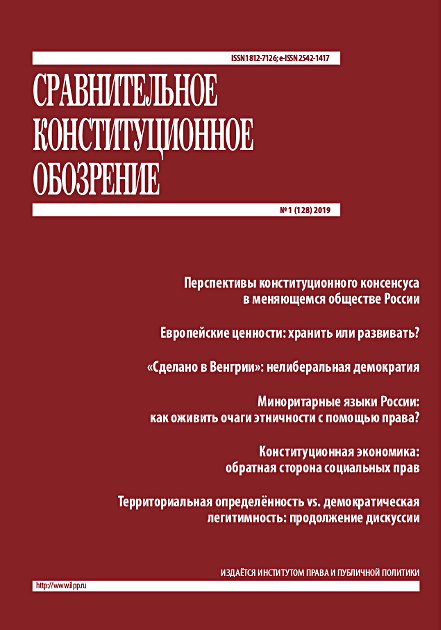 IMITATION AND ITS DISCONTENTS

The authors of the essay provide an explanation of a number of paradoxes in the relationship between the Central and Eastern Europe and Western values. One of the motivations of the anticommunist movement in the European countries belonging to the so-called Socialist Commonwealth was the desire to establish the Western “normality”. After the revolutions of 1989, the countries of the region started reforms by introducing rules and institutions transferred from the West.

THE CONSTITUTION AND SOCIAL DEMAND FOR CHANGE IN CONTEMPORARY RUSSIAN SOCIETY

In this article the author debates the following questions: the main contemporary challenges to Russian constitutionalism, the interdependent logic of Constitutional basic norms and political regime dynamics, the dysfunctions of the legal system and parameters of political reforms prospects for developing constitutional order in light of powertransition processes, and the possible answers of the political elite and professional community to the growing demand for social and constitutional change.

REINVENTING HUNGARY WITH REVOLUTIONARY FERVOR: THE DECLARATION OF NATIONAL COOPERATION AS A READER’S GUIDE TO THE FUNDAMENTAL LAW OF 2011

This article provides a critical analysis of several aspects of constitutional development in Hungary since 2010. In that period of time, the new constitution of the country, called the Fundamental (Basic) Law, was worked out and adopted. This act is a flexible constitution: it can be amended by a majority of two thirds of members of the Hungarian parliament. In combination with the fact that the ruling coalition led by Fidesz has had a necessary majority during two of the last three legislatures, this has allowed for a repeated amending of the young constitution.

THE LIMITS OF ENDURANCE: THE SOCIAL BURDEN OF BUSINESS IN THE CONTEXT OF THE PRACTICE OF RUSSIAN CONSTITUTIONAL JUSTICE

Having analyzed the practice of constitutional justice, the author makes an attempt to disclose certain basic constitutional parameters of interrelations between public authorities and businesses as applied to resolution of social tasks as well as to demonstrate its controversial tendencies. Though the idea of the market economy focused on social needs, which is supported by the Constitutional Court of the Russian Federation, neither refutes nor rejects the free market determining such economy, sometimes the constitutional justice practice shows a clear intention to widen the social rights’ defense range at the expense of businesses which is of no benefit both for social protection and strengthening of economic initiatives. In light of the ideas of distinction between the “general” and “specific” social responsibility of businesses being formed in the supranational “soft law” as well as the constitutional principle of balance of public and private interests, the author substantiates the provisions and measures which should be taken into account for harmonizing the relations between public authorities and businesses not exceeding the limits of the latter’s endurance.

LANGUAGE RIGHTS OF NATIONAL MINORITIES IN THE RUSSIAN EDUCATION SYSTEM

The problem of realizing the language rights of national minorities, enshrining them in legislation, and establishing measures for their provision and protection are of particular interest. This is due to the fact that the vitality of the languages of national minorities is a key issue for the preservation of the ethnic and cultural diversity of the state. With the derogation of language rights and guarantees, small languages are supplanted by the majority language (as a rule, the state language). The speakers of these languages either gradually withdraw from participation in the public life of the state, or are assimilated with the titular nation, losing their ethnocultural identity. According to the author, the educational sphere is a life-giving environment for the normal functioning and development of languages.

JUDGMENT OF THE RUSSIAN CONSTITUTIONAL COURT ON THE BORDERS BETWEEN TERRITORIES OF THE RUSSIAN FEDERATION: RESOLVING A DISPUTE OR AGGRAVATING A PROBLEM?
CASE-COMMENT TO THE JUDGMENT OF DECEMBER 6, 2018, NO. 44-P

Each decision of the Constitutional Court of the Russian Federation attracts the close attention of the legal community, since it affects a huge stratum of social relations and affects the development of law in general. Therefore, it is not surprising that the court ruling in a case verifying the constitutionality of the Agreement on the establishment of the border between the Republic of Ingushetia and the Chechen Republic has piqued interest. This decision created a number of issues requiring further discussion, the formulation of which is the purpose of this work. Many of the legal positions expressed by the court seem at least debatable.