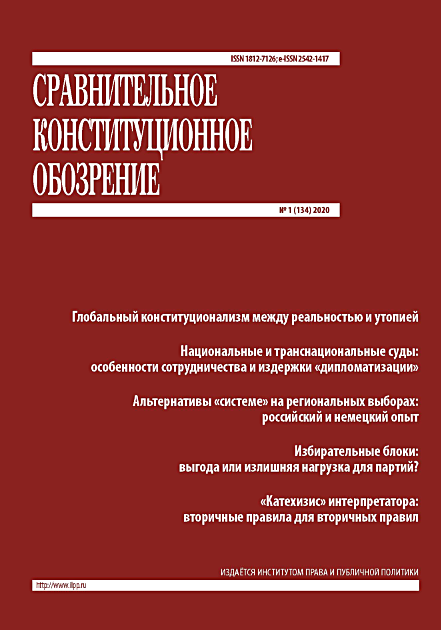 Global (or World) constitutionalism is an established philosophical theory (formed in European thought on the base of Immanuel Kant’s intellectual heritage); the area of legal and political debates about possibility of a new, more faithful, global social and legal order; and the framework for the articulation of the new network of the current political movements, generally oriented on globalized, or more unified vision of the constitutional values, norms and human rights as based on common international construction of the legal order and the global governance. Though many important ideas of global constitutionalism were formulated by international lawyers at the first half of the XX century (in debates occurred after the end of First and Second World wars about the role of the League of the Nations and United Nations Organization), the real practical importance of this theory became much more clear only after the end of the Cold war – the collapse of the USSR and the creation of the European Union in 1991, interpreted by many experts as a principal achievement of this theory, a muster for its practical implementation and a pre-eminent road-map for the future global transformation of international law, constitutionalism and governance.

TRANSNATIONAL JUDICIAL INTERACTIONS AND THE DIPLOMATIZATION OF JUDICIAL DECISION-MAKING

The courts of countries that are part of integration projects in Europe – the European Union or the Council of Europe – operate under conditions where their decisions may differ from the positions of transnational courts, the European Court of Justice and the European Court of Human Rights, respectively. By joining these organizations, participating countries have made certain commitments, including taking into account the requirements of transnational legal systems. However, in practice, the limits of these obligations are the subject of disagreement between transnational courts and the constitutional or other apex courts of particular countries. The main issue is the question which court plays the decisive role by resolving hard cases. Both sides are responsible for increasing tensions between national and transnational courts.

SAXONY – MOSCOW 2019: THE RELATIONSHIP BETWEEN THE GOVERNMENT AND NON-SYSTEM OPPOSITION IN THE LIGHT OF REGIONAL ELECTIONS

In the autumn of 2019, elections to legislative assemblies were held in several regions of both Russia and Germany. Election campaigns in two of them – the city of Moscow in Russia and the state of Saxony in Germany – were accompanied by major political scandals caused by the non-admission of the representatives of the non-system opposition to the elections. In Moscow, several individuals were denied registration as candidates in single-member electoral districts. In Saxony, the local electoral Commission registered only part of the list of candidates submitted by the non-system political party Alternative for Germany. In both regions, the opposition appealed the decisions of the electoral commissions to the courts, and in Moscow also to higher electoral commissions.

ELECTORAL BLOCS: APPLICATION EXPERIENCE AND PROSPECTS OF RETURNING THE INSTITUTE TO THE ELECTORAL SYSTEM OF RUSSIA

This article describes the issues of creation and activity of electoral blocs. Electoral blocs can be considered as unions or associations of political parties, as well as public movements for joint participation in the electoral process, including nominating a joint list of candidates, conducting a joint campaign, as well as monitoring the voting process and appealing against the results. Now, the possibility of creating election unions is provided only at the level of elections to the municipalities and then only in relation to social movements. Political parties still cannot put forward joint lists together with other parties. In this regard, the author pays great attention to the historical analysis of the legal regulation of approaches to the creation of electoral blocs in Russia, as well as the experience of these blocks of participating in real election campaigns.