Home > CCR № 1 (140) 2021 > Persistence in changes: on the true causes of the irresistible attraction of the constitutions of exotic countries

Persistence in changes: on the true causes of the irresistible attraction of the constitutions of exotic countries 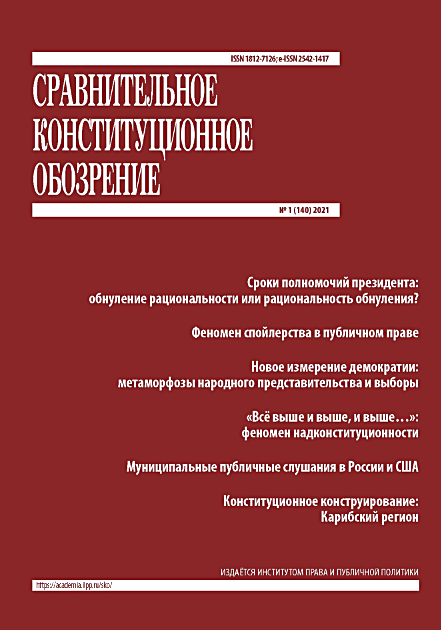 In the great international literature on comparative constitutional law, main theoretical observations and constructions normally been made on the ground of principle Western models interpretation. That is quite natural because the experience of established democracies in their historical and political implications formed the basis and resource of inspiration for many new nations looking forward to create the similar forms of constitutional government in spite of various cultural and social difficulties. But this approach substitute the problem by its ideal solution sometimes ignoring the whole bulk of emotions, hesitations, exaggerated hops, disappointments and interests, which are represented in regions and countries of so-called “periphery zone” of legal development acutely pressed to search their own strategy of constitutional modernization in quite different cultural and political context. This problem becomes the central point in the monumental work under review – “The Oxford handbook of Caribbean Constitutions”. The book providing a solid ground for the complex academic deliberation of one of such regions – a very specific group of countries, which formerly were part of the great European colonial empires, recently proclaimed their independence and stay in a permanent process of constitutional self-determination trying to find their proper way in legal globalization. Carefully summarizing the materials and ideas of this collective work, the author of this review article discusses some general conceptual items of this type of constitutionalism: the role of common culture and history in pre-colonial, colonial and post-colonial legal development; the impact of “colonial legacy” in formation of post-independence constitutionalism of respective countries. He reconsider the place of indigenous forms and imported imperial constitutional design in the establishment of the new constitutionalism and administrative governance; the specific trend to hybridization of different legal traditions, norms and institutes in process of their evolution and selection through constitutional amendments, constitutional jurisprudence and projects of reforms. In concluding part of this article the author summing up his vision of continuity and ruptures in legal development balance of Caribbean region in comparison with Post-Soviet region’s current constitutional transformation.

De Smith S.A. (1964) The New Commonwealth and Its Constitutions, London: Stevens and Sons.