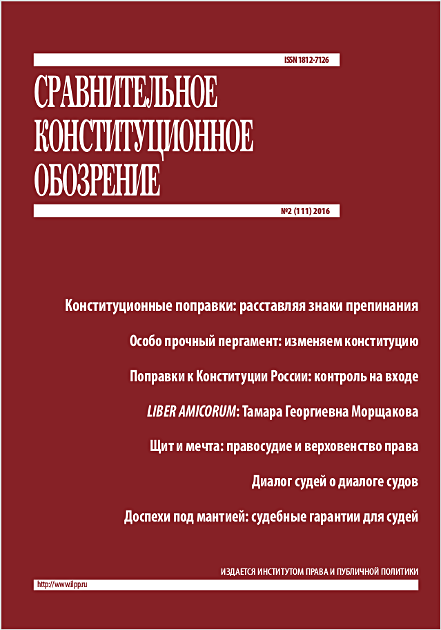 PEASANTS WITH PITCHFORKS, AND TOILERS 15 WITH TWITTER: CONSTITUTIONAL REVOLUTIONS AND THE CONSTITUENT POWER

Constitution of any polity defines its legal order on the basis of a certain system of values. Fundamental values of a constitutional democratic state must be protected not only during a routine implementation of the constitution but also during its amendment procedures. However, the problem of unconstitutional constitutional amendments is complicated and is connected to two different, although interrelated, questions.

DOUBLE АNNIVERSARY. CONSTITUTIONAL JUSTICE AT THE SERVICE OF HUMAN RIGHTS

The present paper provides a survey of а comprehensive collection of scientific works of Tamara Morshchakova. The author scrutinizes the core ideas and concerns of the scholar, her views on principal judicial issues of our time – the independence of the Constitutional Court, its position within the Russian judiciary, its interaction with other courts, its rootedness in the fundamental principles of law, self-sufficiency of its decisions.

This article focuses on the role of the European Court of Human Rights in the promotion of Europe’s closely related fundamental values – such as human rights, the rule of law and democracy. Human rights and rule of law may be considered as two sides of one coin. They inspire the whole Convention and should be understood as guiding principles of the Court.

This article describes international standards regulating access of judges to the courts in questions related to their appointment, career and dismissal. It is primarily focused on the case-law of the European Court of Human Rights, which originally was reluctant to recognize the right of judges to have access to justice in those matters.

THE EUROPEAN COURT OF HUMAN RIGHTS AND NATIONAL COURTS: HOW TO REACH UNDERSTANDING?

A DIALOGUE OF JUDGES ANATOLY KOVLER AND TAMARA MORSHCHAKOVA

CONSTITUTIONAL AND JUDICIAL IMPLEMENTATION OF THE EUROPEAN CONVENTION ON HUMAN RIGHTS

The author analyses the requirements of the Constitution of the Russian Federation which ensure enforcement of international legal standards of human rights and freedoms as well as the significance of these constitutional provisions for supporting Russia’s application to join the Council of Europe.

REVIEW OF JUDGEMENTS OF THE RUSSIAN CONSTITUTIONAL COURT: JANUARY – FEBRUARY • 2016