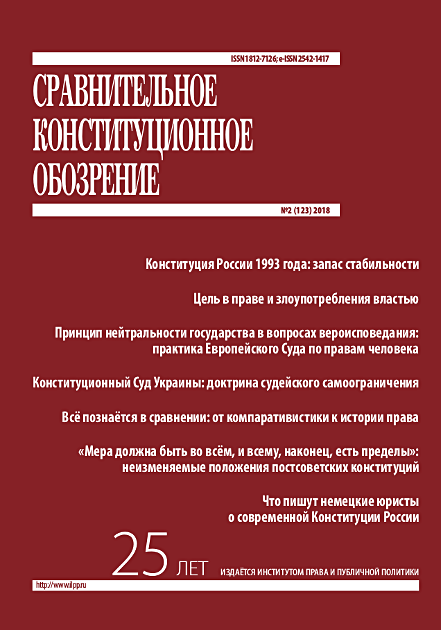 RELIGION AND EQUALITY: FROM MANAGING PLURALISM TOWARDS A EUROPEAN REQUIREMENT OF STATE NEUTRALITY

In the footsteps of the Kokkinakis judgment the ECtHR turned Article 9 into a vehicle wherein restrictions of religious liberty in the name of peaceful coexistence in a plural society are woven into the fabric of human rights analysis. In practice this means that the jurisprudence of the Court assists member states in maintaining legal rules and practices that favor historically dominant churches or majorities to the detriment of unpopular or non-traditional religious minorities. Recently the ECtHR appears to have adjusted the intellectual framework of its approach to religious freedom under Article 9 by invoking the requirement of state neutrality and impartiality alongside the duty to preserve religious pluralism. Case by case, the duty of neutrality has become a source of obligations, such as the prohibition of arbitrary state action or the prohibition of coercion in matters of conscience.

ABUSE OF RIGHTS AND ABUSE OF POWER: TO THE FORMATION OF A UNIFIED DOCTRINE

In the present article, the author examines the theoretical problem of abuse of rights (powers) by the state in domestic legal science on the basis of the French judicial doctrine “détournement de pouvoir”. The thesis that abuse of rights (in particular, in the form of circumvention of law with an unlawful purpose) is not a category only of civil law, but is a universal or common legal principle, serves as a starting point for this research. In practical terms, this makes it possible to significantly expand the grounds for declaring normative and individual acts of state bodies and officials null and void. In particular, examples are given of this kind of abuse on the basis of the practice Constitutional Court of the Russian Federation on issues of the right of citizens to conduct peaceful public events. Moreover, the author examines some interrelated theoretical issues, including: the importance of the categories of “interest” and “purpose” in law, the relationship between the restriction of basic rights and the prohibition of the abuse of rights, the concept of discretionary powers and tied competence, the difference of vague and evaluative legal concepts, and so forth.

SELF-RESTRAINT IN THE ACTIVITIES OF THE CONSTITUTIONAL COURT OF UKRAINE

This article discusses the activity of the Constitutional Court of Ukraine at its present stage of development. The doctrine of judicial self-restraint, which was adopted by the Constitutional Court back in the late 1990s, is critically appraised. The main forms of judicial self-restraint that are used in common law countries – primarily in the United States – are examined and relevant court practices are analyzed. The author comes to the conclusion that there is a certain discrepancy between the democratic standards for the administration of justice in the Ukrainian modification of the doctrine of judicial self-restraint. In this connection, the inconsistency and internal contradiction of the latter can be criticized. The paper also makes an attempt to analyze the definitions of the refusal to open proceedings in a case passed by the Constitutional Court in 2017. The slowdown in the pace of the work of the Constitutional Court has been associated with the phenomenon of “strategic escape”, which finds its expression in the activity of the constitutional jurisdiction body mainly due to the fact that the Court refuses to accept the most politically significant cases for consideration and delays – sometimes for years – consideration of those cases that are already underway.

Recent rapid changes in the world have put all legal traditions to the test. In Europe they are boosting interest in comparative legal history and research into factors of legal development through a comparative analysis of two or more jurisdictions of the Old World. This new approach is generating vivid debates and yielding some valuable publications. Yet its methodology is far from clear. Does comparative legal history have methods of its own? Or does it borrow methods from comparative law? To resolve this complicated issue, one must look at the basic assumptions of comparative study in contemporary law and its history because they assure the compatibility of specific methods. In this article the author investigates such common basic assumptions as the complex and less coherent picture of law in the past and present (as compared to the scientific perception in the late 19th and early 20th centuries), the multilinear evolution of law, interconnectedness and legal traditions, the persistence of ubiquitous legal transplants due to cross-cultural influences, and flexible regularities of legal development. These basic assumptions allow for several methodological conclusions in comparative research.

CONSTITUTION AS A STABILITY MARGIN OF A STATE DOES THE POTENTIAL OF THE 1993 RUSSIAN CONSTITUTION REMAIN?

The Constitution is considered to be a mega-regulator of relationships in society and in the state that provides a particular reservation of potential stability. This can be evaluated using a physics-based approach that includes an entropic resource as its basis. Entropy is a general expression of numerous process anomalies and accumulated dysfunction. Political and ideological diversity, along with other democratic principles, are beneficial, but costly. They facilitate a quick increase in entropy, which needs to be compensated by economic mechanisms and/or a wide attraction of intellectual resources (such as science). However, the real situation in the country demonstrates that the economy is failing to meet this requirement, and that the government is not considering science to be an important regulator. In these circumstances, the potential stability of the Constitution is quickly spent, although currently it has not yet been exhausted. Changing the constitution–not just changing one legal document for another–is a complex process that results in a loss of control of a portion of the system’s connections and that stimulates a search of alternative paths of development. Without the reserve of potential constitutional stability, one can count on changing the constitution only in extreme circumstances.

THE NEW FORMAT FOR COMMENTING ON THE RUSSIAN CONSTITUTION: THE AUSTRO-GERMAN PROJECT