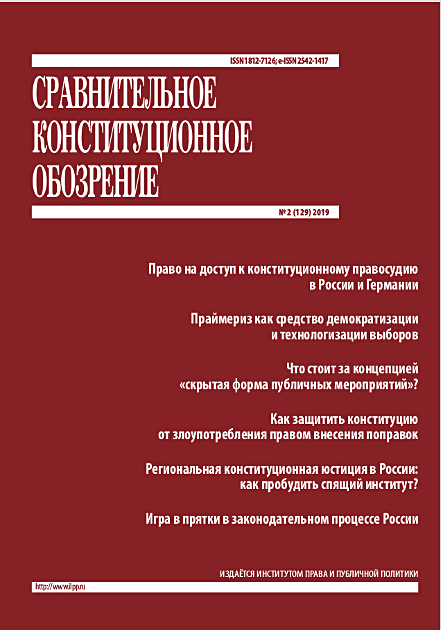 This paper describes and analyzes the formation and development of the technology of “drawers” in federal legislative procedure. In the introduction, the author explains his metaphor of a drawer in the context of legislative procedure. The first part of the paper is devoted to a type of the abovementioned technology called “covering,” where the resonant norms in the bill divert the attention from other important provisions. The second part of the paper deals with another type of “drawer”: the transformation. The third part of the paper gives the basic impression about the peculiarities of the constitutional principle of mutual trust between society and governmental bodies. In conclusion, the author underlines the problem of lack of transparency and validity during the adoption of bills, which can lead to a reduction in the level of social trust.

PRIMARY ELECTIONS IN RUSSIA AND IN FOREIGN COUNTRIES: FEATURES OF CONSTITUTIONAL LAW REGULATION

This article reviews a comparative analysis of approaches to the legal regulation of primary elections (primaries) in the United States, Argentina, Uruguay, France, Israel, and Russia. Even though in the United States parties began to hold primaries in the middle of the 19th century, Russian parties drew attention to this institution only in the early 2010s. The author concludes that primaries could have a positive impact on the development of the party system in the Russia.

RIGHTS AND FREEDOMS AS A CONSTITUTIONAL VALUE

“THE LATENT FORM OF COLLECTIVE PUBLIC EVENTS”: ADJUDICATIVE AND DOCTRINAL POSITIONS IN RUSSIA AND GERMANY

FREEDOM OF EXPRESSION: AN OVERVIEW OF THE MAIN THEORIES

This article looks at different theories of freedom of speech, specifically the way scientists and judges articulate its legal nature. The author concentrates on three main theories that have had the highest impact on the doctrine in Russia, the United States, and other countries.

“LET THEM PUT EVEN MORE BELTS ON YOU”: THE JUDICIAL REVIEW OF CONSTITUTIONAL AMENDMENTS IN A COMPARATIVE PERSPECTIVE

Compliance with the limits of constitutional change is within the competence of the bodies involved in this process. It is the prerogative of political authorities: the parliament, the head of state, the authorities of the states of federal unity, or the people themselves. However, such bodies may either be in the thrall of their own convictions or belong to the same political platform, which objectively reduces the degree of control over one another, or they may simply have the goal to abuse their power to amend the constitution.

STATUTORY COURTS IN SUBJECTS OF THE RUSSIAN FEDERATION: A COMPARATIVE POLITICAL AND LEGAL ANALYSIS

The development of regional constitutional justice has become an important issue not only for law but also for politics. However, the main emphasis in modern studies has shifted towards the study of primarily legal aspects of the activities of constitutional (statutory) courts. The authors consider that regional constitutional justice has a mixed political and legal nature and requires an interdisciplinary approach based on studying not only the legal but also the political conditions of constitutional courts. In this article, the authors conduct a comparative political and legal analysis of the experience of the emergence and evolution of four statutory courts in the subjects of the Russian Federation: Sverdlovsk, Kaliningrad, Chelyabinsk, and Saint Petersburg.