The state and law: metamorphoses of the Russian legality over 300 years 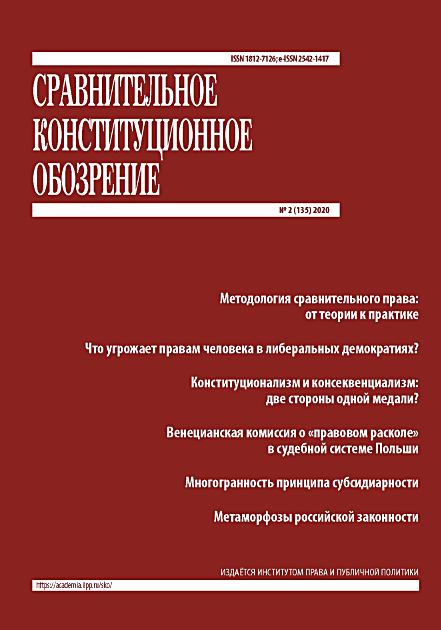 The comparative analysis of different legal cultures and traditions is an important target of jurisprudence in the epoch of globalization regarding such issues as common and original aspects of various legal systems, norms and institutions, their evolution in history and cross-cultural influences. The substantive part of this research strategy includes clarification of value-systems, legal stereotypes, and even prejudices of different nations as represented in a long-term historical evolution and modes of its evaluation by domestic and foreign observers in contested narratives. The book under review demonstrates an interesting and controversial approach to this subject by using a de facto anthropological reconsideration of the Russian legal tradition covering the significant historical period from Peter the Great to Vladimir Putin. The author postulated the original character of the Russian legal tradition describing its essence as the eternal reproduction of a very specific form of legality, namely, functional or administrative-legal regulation of society by the state. He argues that this functional paradigm codified in the soviet theory of state and law, in reality, reflects the genuine structure of legal thinking, mechanism of power and ideological ground of the Russian statehood during the periods of Empire, Soviet dictatorship and Post-Soviet government. Thus, for the author of the book, it seems to be a formula of power symbolizing the historical continuity of the Russian legal culture as well as its main difference from the Western law-based state. The author of this review demonstrates the positive and the negative sides of this scheme of the Russian legal tradition: while it is a logical explanation for the evident and undisputable priority of the state over society in Russian history, this theory of functional legality leads to the apparent oversimplification of country’s complex legal evolution and its place in comparative perspective. From the anthropological point of view, this concept provides a very clear image of the dominant Anglo-Saxon narrative of the Russian legal past and present with all its stereotypes, shortcomings, and beliefs. Reconsideration of these historically formed mental stereotypes on a neutral and value-free base could be helpful for the reliable understanding of the paths of Russia’s legal transformation in the new globalized world.