Constitutional rights and freedoms in the third Russian post-soviet republic 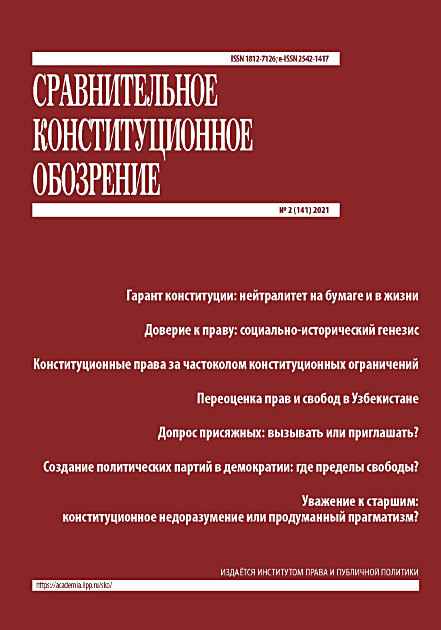 The main idea of the article is that most provisions of the amendment to the Russian Constitution, which was adopted in 2020, affect constitutional human rights in one way or another and limit them. The changes made by the amendment to the configuration of the state powers and the legal status of a man and the citizen, are so significant that the model of the Russian state organization installed after its introduction can be considered the third post-Soviet republic. We believe that the first post-Soviet republic was existing during the 90-s years of the XX century in our country. It was characterized by a significant commitment to the European standards. The second one covered the first two decades of the XXI century. It was characterized by the struggle of two inertial mechanisms: the new democratic one, which was launched in the period of the first republic, and the old dictatorial one, which did not cease to operate, and it has grown stronger while the new Russian political leadership was relying on it. The period of the third post-Soviet Russian Republic, which began together with the amendment-2020 to the Constitution, is characterized by the prevalence of elements of the dictatorial model of governing in our country. Within the context of the role of the amendment provisions in insuring of human rights, they can be divided into three categories: direct and indirect restrictions of human rights and neutral ones for their quantity and quality but intended for diverting attention from the rights restrictions imposed by the two first groups of the amendment provisions. Restrictions imposed by the amendment affect personal and political rights while false guaranties cover social rights. The direct restrictions on human rights mean impositions of prohibitions or duties on a person by the amendment. Indirect ones include the weakening the mechanism of checks and balances by means of strengthening the President power. The author concludes that the direct and indirect restrictions on personal and political rights do not pass the proportionality test, established by Russian Constitution (Part 3 of Article 55), being illegal for this reason.