Home > CCR № 3 (112) 2016 > The first among the equals?.. Evolution of the legal status of the Catholic Church and other confessions in Italy

The first among the equals?.. Evolution of the legal status of the Catholic Church and other confessions in Italy 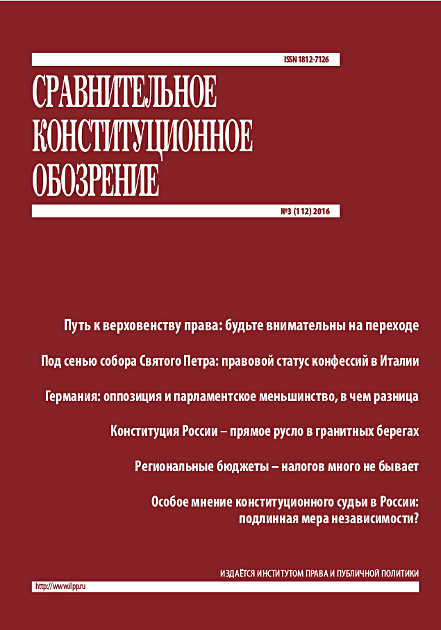 In this article the author examines constitutional regulation of legal status of religious confessions and their organizations in Italy, focusing on the Roman Catholic Church as a predominant religious and cultural institution in this country. The author starts with considering the subject from historical point of view. The article concentrates on some special features of the legal status of religious organizations at various periods of time: from Risorgimento and establishment of the modern Italian nation-state in the late 19th century, through liberal era of the early 20th century and Fascist regime, and up to present day Italy. This approach helps to recognize and scrutinize the main factors and evolution perspectives in constitutional and other legal regulations in the field of religious life. The author compares today’s legal statuses of the Catholic Church and other religious organizations in Italy by a thorough analysis of current Constitution and other laws, vital for definition of current legal status of all actors in the religious segment of Italian civic society. The author presents a hierarchical diagram reflecting differences in the legal status of various religious organizations in the country. The article goes further into structural characteristics of current Italian legislation on issues of religious freedoms and rights. The author pays special attention to the public response (home and abroad) to the initial ECHR decision in Lautsi v. Italy. Finally, the author comes to conclusion that so far Italy is on its way to equality of all religious confessions, though the Catholic Church retains its dominant if debated position due both to its special legal status and its unique role in Italian history, culture and national consciousness.

Ferrari S. (2009) Gosudarstvo i tserkov' v Italii [The State and the Church in Italy]. In: Robbers G. (sost.) Gosudarstva i religii v Evropeyskom Soyuze [The states and religions in the European Union], Moscow: Institute of Europe RAS, pp.259–285. (In Russian).