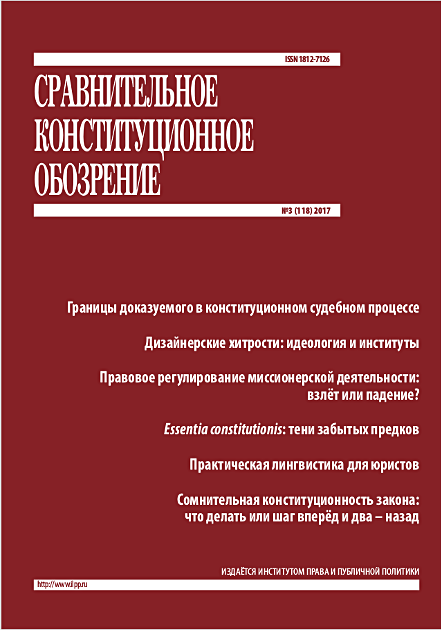 THE MODEL FOR COMPOSITION: RUSSIAN FEDERALISM OF THE XX–XXIth CENTURIES IN SEARCH OF IDENTITY. PART 2

The evaluation of contemporary Russian federalism makes it clear that it stay too fare from being the sustainable phenomenon comparable to the full-fledged democratic models in terms of symmetry, structure, and functional efficiency. One of the main causes of that inconsistency presumably could be found in the permanent reproduction of birth marks of Soviet constructions which are still alive in the current constitutional regulation, legal politics and the practical implementation of federalist institutes. The main questions of this investigation are the following: which are the most typical traces of Russian federal system in comparative and a long-term perspective of Soviet and Post-Soviet regulation; how this system was created in the period of revolutionary turmoil and developed in the course of social and constitutional transformation under Communist dictatorship; which were targets of the founding-fathers and how their intentions transformed in the process of one-party regime consolidation, and finally, why this system survived after the collapse of Soviet Union in its important features. In order to find answers, the author analyses archival materials of all Russian Constitutional commissions and products of their work (Russian Constitutions of 1918, 1925, 1937, 1978 and 1993).

LEGAL REGULATION OF MISSIONARY WORK: RUSSIAN REALITIES AND THE EXPERIENCE OF THE COMMONWEALTH OF INDEPENDENT STATES

Missionary activity is a form of promoting religious beliefs based on the constitutionally affirmed freedom of conscience. In 2016, some new amendments to the Russian legislation on freedom of conscience and religious organizations were adopted to improve the regulation of missionary work and allegedly to combat religious extremism. However, the contents of these new legal norms drew many complaints from the scientific community and religious organizations. This article is a comparative survey that considers contemporary forms of relationships between states and religions and their influence on constitutional and other aspects of regulating the missionary work of religious organizations and communities within the borders of the former Soviet Union. Based on a comparative legal analysis of foreign legislation in this field, this paper defines possible paths for regulating missionary work in various models of fortifying freedom of conscience and the right of individuals to spread their religion in Russia and the Commonwealth of Independent States.

EMBRACING THE UNEMBRACEABLE: FACTS AT ISSUE IN RUSSIAN AND AMERICAN CONSTITUTIONAL LITIGATION

A fairly stable idea has prevailed in Russian constitutional scholarship that, while deciding only questions of law, the Constitutional Court of Russia is not to undertake any fact-finding. Legal scholars who based their research on these methodologically inaccurate positions have expectedly failed to shed light on the true role that facts play in the constitutional decision-making process. This article is an attempt to make changes to this methodology and consider constitutional fact-finding from a lawmaking perspective. Indeed, constitutional review organs tend to find facts not for the purpose of applying pre-existing legal rules to them, but rather for the purpose of evaluating factual premises that the challenged legal rules are based on. In this sense, established facts create a context in constitutional litigation, thereby making it possible to efficiently exercise substantive judicial review of legislative actions.

25 YEARS OF THE CONSTITUTIONAL COURT OF RUSSIA: LESSONS FROM THE PAST AND AGENDA FOR THE FUTURE

SOME CURRENT ISSUES OF CONSTITUTIONAL JUSTICE DEVELOPMENT IN RUSSIA

In developing a strategy of constitutional justice, the Russian Constitutional Court, which operates as a body for the protection of the Russian Constitution, is responsible for the proper understanding, definition, formulation, and objectively necessary substantive development of its own competence. With regard to the protection of human rights and civic freedoms, the Constitutional Court should also be both the vehicle and guardian of international standards of law. Effective constitutional control could not come into existence without the Court and a system of necessary measures for implementing its decisions, as well as without the Court paving the way for necessary changes in legal regulation and instructions for reviewing earlier decisions of other courts to protect and restore violated constitutional provisions and rights. Thanks to this position of the Constitutional Court, reforming Russia’s judicial review system – overdue for a long time – has become possible.

THE ART OF LEGAL WRITING: A QUANTITATIVE ANALYSIS OF RUSSIAN CONSTITUTIONAL COURT RULINGS

Quantitative text analysis is a new but rapidly expanding and promising field in empirical legal studies. This paper applies the methods of quantitative studies of legal texts to the decisions of the Constitutional Court of the Russian Federation. The analysis uses the formal quantitative index of the plainness of texts, namely the Flesh-Kincaid index, in order to understand to what degree the readability of the Court rulings correlates with various applicant categories and how the Court considers various cases and reacts to various challenges. The author surveyed 473 decisions issued between 1992 and 2015; a thorough analysis of this material constitutes the core of this study. The author finds that the overall complexity of the text of the Constitutional Court’s decisions is high and demands a high degree of competence from the reader.

This article considers the judgment of the Constitutional Court of the Russian Federation in Dadin. The author presents an organizational and legal basis for a new type of decision that the Constitutional Court could pass based on the outcome of a case on the verification of the constitutionality of an enactment. The article highlights problems concerning the choice of this type of decision in Dadin. That the Court’s interpretation did not decriminalize the act prohibited by Article 2121 of the Russian Criminal Code is a justified conclusion: firstly, decisions of the Court cannot be considered as acts of law enforcement, and secondly, when the Court rules that a criminal statute is unconstitutional, this does not automatically result in the statute being removed from the Criminal Code.

REVIEW OF JUDGEMENTS OF THE RUSSIAN CONSTITUTIONAL COURT: MARCH – APRIL • 2017