Home > CCR № 3 (124) 2018 > Freedom or suspiciousness: how to protect liberal constitutionalism from its enemies

Freedom or suspiciousness: how to protect liberal constitutionalism from its enemies 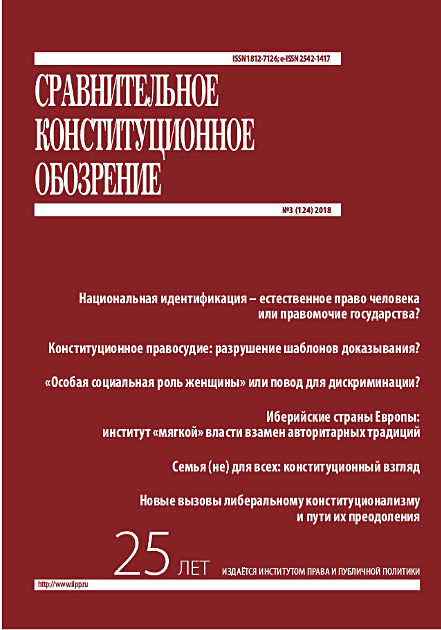 The current crisis of constitutionalism as an apparent challenge to liberal democracy makes it important to understand its social origins, implications, and forms of protection. The book under review presents a broad vision of the problem and a comparative analysis of theoretical, institutional, and functional deviations of authentic liberal constitutionalism, including its values, principles, and incentives. A fundamental work on the nature of contemporary constitutional crisis, its causes, and practical outcomes in the erosion of principles, norms, and institutes, the book could be interpreted as an original encyclopedia of constitutional deviations of any kind deeply rooted in the scarcity of enlightenment, institutional disproportions, and in the target-oriented intentions of some political regimes to deconstruct, put under question, or limit the achievements of the liberal democracy. From this point of view, it should be appreciated as a courageous, profound, and rather sustainable criticism of constitutional conformism which ignore the very existence of illiberal legal transformation, diminishes its importance, or even approves it as a form of constitutional realism. That is why the book should be recommended as instructive reading not only for European intellectuals, but for Russian intellectuals as well. In this context the book shows how contemporary political regimes reduced the essence of liberal principles, parliamentary democracy, separation of powers, independent justice, and individual rights while keeping unchangeable all formal aspects of constitutionalism or even using them for the establishment of illiberal democracy. The implacable criticism of these deformations makes the book a good guide in the labyrinth of legal misunderstandings, manipulations, and hypocrisies at the epoch of populist democracy – instruction which could be equally useful for true adherents of constitutional order and for its authoritarian enemies. That makes the authors’ position rather ambivalent: on the one hand, they stay in a constant search for a standard legal remedy against the mentioned constitutional disease, while on the other hand they hope to find it outside the traditional legal framework in spontaneous psychological attitudes, mental prejudices, and even mistakes of constitution makers regarding such items as constitutional beliefs, fears, and nostalgia. This approach, based on a psychoanalytic vision of constitutionalism, perhaps could be useful for the understanding of constitutional pathologies but probably is not really instructive for rational constitutional constructivism as a calculated balance between benefits and loses of political elites in power. The reach of the empirical information of the book and the observation of the authors’ key ideas and arguments makes possible another conclusion: that reason, not suspicion, should be the first duty of the constitutionalist.