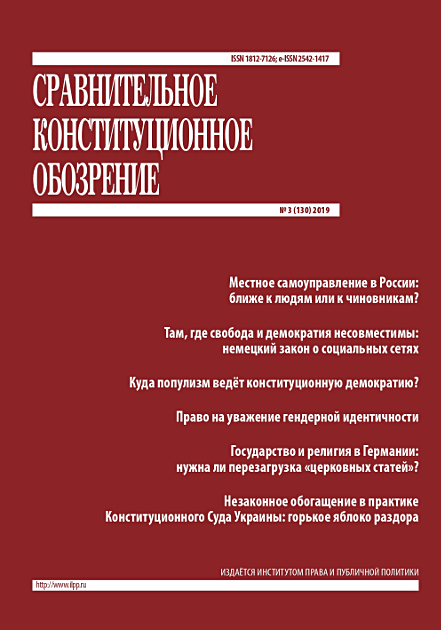 In this paper the phenomenon of populism is explored from the angle of antipaternalism. It is claimed that political antipaternalism – the belief that the preferences of people should be turned into authoritative decisions without change or delay – explains well some of the basic features of contemporary populism. The paper explores the reasons for the rise of political antipaternalism and argues that it has become a convenient ideology for majorities in Western and Eastern European democracies, which have grown increasingly self-interested and egoistic (acting on the rational choice model of homo economicus). The paper discusses in some detail the transformations of contemporary political parties in their attempt to adapt to circumstances of low public trust and antipaternalistic attitudes.

LEGAL REGULATION OF THE INTERNET

The German law on social networks was adopted in summer 2017 on a wave of hysteria that was emerging in Western democracies after the election of Trump in November 2016. Due to the position of the German government, the goal of the law has been to fight fake news and hate speech. By analyzing of the application of the law in 2018, we can obtain results that do not definitely support the position of the government or that of its critics. However, an unexpected development has been emerging: German civil courts handling claims of users whose content was removed or blocked by social networks decided in a number of cases that the social networks violated the constitutional freedom of speech (article 5 section 1 of the German Fundamental Law).

A RIGHT TO RESPECT FOR GENDER IDENTITY: NEW STANDARDS FOR PERSONAL AUTONOMY

The article focuses on the right to respect of one’s gender identity, which is one of the inalienable attributes of personal autonomy and dignity in their contemporary understanding. Discovering the constitutional meaning of this right is an important task due to the rapid development of biomedical technologies and the subsequent rejection of a strict presumption of the objective nature of gender. The article considers several constitutional arguments used by national and international judicial authorities that contribute to the gradual adoption of the above-mentioned principle, rejecting sex reassignment surgery as a necessary prerequisite for official gender recognition. The author devotes a special paragraph to the issue of the interconnection between the right to recognition of one’s gender identity and the principle of gender equality.

STATE-CHURCH LAW (STAATSKIRCHENRECHT): THE ANSWER OF GERMAN CONSTITUTIONALISM TO THE CHALLENGES OF RELATIONS BETWEEN THE STATE AND RELIGION

It is proposed to consider the current theory of state-church law developed by German scholars, the study and appropriate perception of which can greatly facilitate the search for an adequate response to contemporary challenges facing constitutional law in the sphere of state-confessional relations. Modern state-confessional relations are on the verge of forming a new model of legal regulation. Having a long history, they, contrary to the more and more often sounding views, are still very far from their complete exhaustion, if that is even possible in the distant future Hundred years of experience of “church articles” of the Weimar Constitution shows that such cooperation, on the one hand, can fit into the constitutional and legal framework of the principle of a secular state, on the other – to be socially useful for all social forces. The experience of German constitutionalism shows several positive points.

DOWN THE STAIRS LEADING UP: LOCAL COMMUNITIES AND OVERCOMING THE MUNICIPAL CRISIS

Against the backdrop of the ongoing crisis of local government in Russia, caused, among other things, by legislative changes in recent years, the question of preserving self-governing institutions, including the ones within cities, has become quite acute. The author of the article maintains that the answer to the arising difficulties could lie in the formalization of local communities as subjects of municipal administration in certain territories within city boundaries. The article, with due regard for the differences in the models of local government in Russia and foreign countries, discusses theoretical approaches to the concept of local communities and describes approaches to the establishment ofspatial limits for their functioning.

LOCAL GOVERNMENT: LOCALIZATION OR UNIVERSALIZATION?
AN ANSWER TO THE ARTICLE BY A. LARICHEV

This article contains a critical analysis of the approach proposed by A.Larichev for the development of local communities in the context of urban self-government. Sharing the common conviction of A.Larichev that stimulating the local level is an important factor for overcoming the crisis of local self-government, the author warns against excessive enthusiasm for the idea of localization against opposing local levels of territorial self-organization, in which the local level is regarded as the main genuine form of self-governance.

POLITICAL REASONING IN THE DECISIONS OF THE CONSTITUTIONAL COURT OF THE RUSSIAN FEDERATION: ANALYSIS OF THE JUDGMENT OF JULY 14, 2015, NO. 21-P

ILLEGAL ENRICHMENT: PERSPECTIVES FROM ZHYLIANSKAYA
COMMENTARY TO THE DECISION NO. 1-R/2019 OF THE CONSTITUTIONAL COURT OF UKRAINE FROM FEBRUARY 26, 2019

This article analyzes judgment no.1-r/2019 of the Constitutional Court of Ukraine from February 26, 2019, which abolished criminal liability for illegal enrichment. The article provides a general description of both the socio-political environment and the courtroom atmosphere in which this judgment was adopted. This article criticizes number of procedural tricks, especially that the trickts were used by judges to prevent their condemnation from civic society and protect their personal records. Special attention is paid to the international standards of the fight against corruption, which are enshrined in various conventions. Being able to appeal to such international conventions would allow the Court to strengthen its position. The author conducts a detailed analysis of the argumentation of the final decision, consistently isolating the motives that led the Court to its corresponding conclusions.