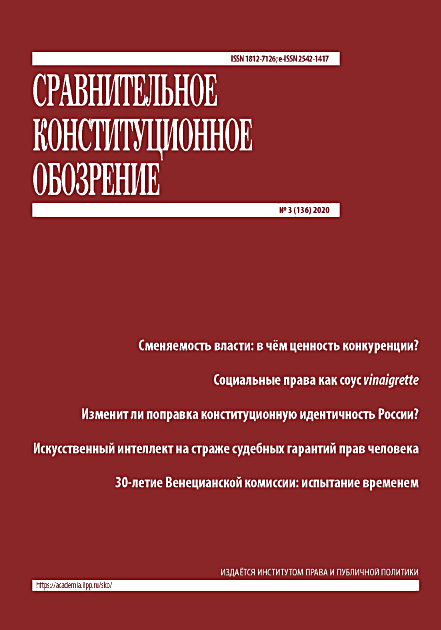 In 2020 European Commission for Democracy through Law (better known as The Venice Commission) celebrates its 30th anniversary. The article deals with the main stages of evolution of expert activities of the Commission especially after expanding the geography of its members (62 member states and several observes). From the very first days of its existence, the European Commission for Democracy through Law (Venice Commission) has emphasized as a priority the effective functioning of democratic institutions through the implementation of the rule of law principles, especially in the field of constitutional law and the administration of justice. According to statistics of the Commission in 2019 were adopted 43 documents, from them 6 thematic compilations of previous opinions, 22 opinions, 5 opinions amicus curiae, 7 reports, 3 guides and comments. The subject matter of these documents is diverse: constitutional reforms – 2, state bodies – 4, constitutional justice and judicial system – 20, human rights – 10, other issues (elections etc) – 7. These data indicate an increasing variety of problems of expert activity of the Commission. Expert assessments of the draft Constitution of the Russian Federation of 1993 were among the first opinions of the Venice Commission. Subsequently, the Venice Commission several times addressed the issues of the Russian constitutional system, as well as constitutional system of other states. The VC Report on the Rule of Law (2011) and the VC Rule of Law (2016) are of great importance. Issues of the constitutional basis of the judiciary and its functioning are also priorities of the Venice Commission’s activity, especially in recent years, when relations between the judiciary and other branches of power have escalated in a number of European states. The article emphasizes that the 1993 Report on the independence of the judiciary and the role of the public prosecutors department is very important even now. The starting point of numerous VC opinions and reports in this area is to ensure the real independence of the judiciary and the judges themselves. In recent years the activity of the Venice Commission has noticeably revived in the field of electoral law and organization of elections. The agenda includes not only several issues related to electoral systems, but also such acute problems as political corruption and abuse of administrative resources.