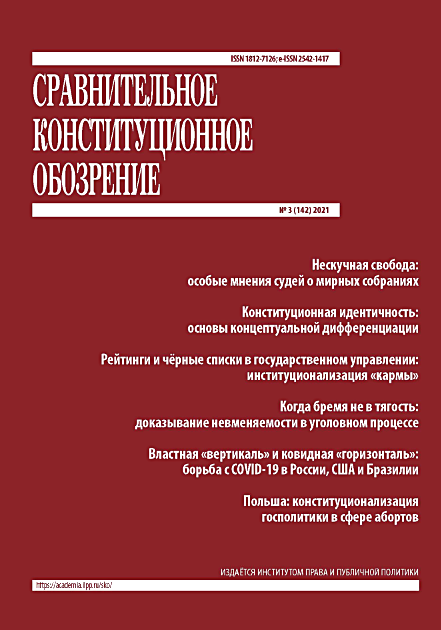 DISSENTING OPINIONS ON THE FREEDOM OF PEACEFUL ASSEMBLY

LEGAL-THEORETICAL NATURE OF THE CONCEPT OF CONSTITUTIONAL IDENTITY

HUMAN RIGHTS IN A NEW REALITY

THE SOCIAL CREDIT SYSTEM IN CHINA: A MODEL OF CONSTITUTIONALISM FOR THE ERA OF CRISES

This paper focuses on the probable transformative effects of the application of the Chinese Social Credit System and similar projects in the realm of public administration on constitutional rights and freedoms, balances in citizen-state relations, and the model of statehood. The starting point of the research is the assumption that the Social Credit System, despite its specifically national Chinese peculiarities, can be seen as a reflection of a broader tendency towards the use of reputational information, techniques of ranking (grading) and risk management in the process of exercising the state power. To test this hypothesis, the author analyzes the actual experience of the Social Credit System’s introduction in the People’s Republic of China, compares this project with e-government projects, and proposes the umbrella-term of “social-credit mechanisms” to describe procedures and means of social control, based on the permanent collection and analysis of reputation data relating to persons. It is argued in this paper that the introduction of social-credit mechanisms to the practice of public administration ultimately leads to the emergence of a gap between formally enshrined rights and the actual ability to exercise them, between the legal capacity of a person and the ability to realise this capacity in certain legal relations. Examining the prospects of introduction of reputation-based social-credit mechanisms to the public administration, the author notices the probability of discrimination against persons who took a false step. As is demonstrated in the paper, the use of reputation data and social ratings by state authorities may result in the gradual differentiation in quality and scope of public services depending on social ratings (grades) of their addressees. This state of affairs may signify the birth of a new caste society and the end of the principle of equality before the law. According to the conclusions made in the paper, projects akin the Chinese Social Credit System reflect the global tendency towards the formation of a new type of constitutionalism. In the framework of this new constitutionalism the main emphasis will be shifted from citizens’ democratic participation in the execution of state power and the citizenry’s political subjectivity to ensure public safety and social stability. The issue of social-credit mechanisms’ introduction to the process of public administration is de facto an issue between the values of freedom and the values of security — the issue of choosing between political subjectivity and guaranteed biological existence.

LAW IN A TIME OF CRISIS

EMERGENCY POWERS OF THE AUTHORITIES OF THE CONSTITUENT UNITS OF THE FEDERATION (STATES) IN RUSSIA, THE USA AND BRAZIL AMID THE SPREAD OF A NEW CORONAVIRUS INFECTION

Due to the new coronavirus pandemic, high alert regimes were introduced across the Russian Federation in spring 2020. These emergency regimes were established exclusively by the state bodies of the Russian Federation’s constituent units – federal authorities did not introduce their own emergency regimes. This decentralized strategy of fighting the pandemic was also introduced by the USA and Brazil. Their states, without the sanction of the federal government, and in the case of Brazil, ignoring its bans, set emergency restrictions similar to those in Russia. The legal regulation of emergency regimes existed before 2020, when constituent units of the federation (states) actively used their emergency powers. However, the regimes introduced during the fight against the pandemic were slightly different to previous ones. The restrictions on rights and freedoms within these regimes were so severe that not only their proportionality was questioned, but there were also doubts as to whether the regional level of the government had the authority to establish such strict restrictions. In addition, the pandemic exposed old problems and revealed new shortcomings in the legal regulation of emergency regimes: lack of control over the realization of the emergency regime by legislative (representative) authorities, and gaps in legislative regulation – notably in the establishment of possible restrictions and of a mechanism for scrutinizing their proportionality. All this raised questions about the proportionality of the established restrictions. The Constitutional Court of the Russian Federation resolved a very insignificant amount of the problems. While the United States and Brazil faced similar issues, the practice of scrutinizing implemented restrictions in these countries was more common. This article takes domestic and foreign experiences into account, while examining certain aspects of the establishment and the operation of regional emergency regimes.

Allocation of the burden of proof is a key issue of criminal procedure that is affected by multiple legal and social factors. Under due process principles, the defendant’s right to a fair and impartial trial is deemed to be the epicenter of the whole structure. However, efficient law enforcement is a prominent public interest that must be considered. This article explores the correlation between public and private interest in proving insanity under the law of New York, which provides great empirical background due to its long history of legal disputes and legislative changes. Considering the nature and structure of the burden of proof, the author concludes that there are several principles for its fair allocation: the due party that bears both the burden and the risk of its nonperformance; the feasibility of the burden; the adequate opportunity for the other party to rebut; the concentration of resources upon needs that are not presumed but in fact exist. All the mentioned principles lay the ground for the harmonization of constitutional guaranties for the defendant as well as the successful enforcement of criminal law. The current New York approach to insanity defense as an affirmative one along with the history of its implementation tends to prove its compliance with such requirements. This finding suggests that bearing the burden shall not be treated as impairment by default, but can protect both the interest of this party and the integrity of the whole process.

YOUR BODY IS NOT ONLY YOUR BUSINESS: COMMENTARY ON POLAND’S CONSTITUTIONAL TRIBUNAL JUDGMENT OF 22 OCTOBER 2020 NO. K 1/20

For about 30 years, the topic of abortion has remained a “bone of contention” between conservative and liberal members of Polish society. In October 2020, these discussions moved from the political and religious planes to the legal field: the Constitutional Tribunal of the Republic of Poland considered the issue of women’s right to “eugenic abortion”. The Constitutional Tribunal scrutinized the provisions of a specialized law, allowing the termination of pregnancy in case of a high probability of a severe and irreversible fetal malformation or an incurable disease threatening its life. As a result, in the Judgment of 22 October 2020 no. K1/20 the Constitutional Tribunal upheld the position of the applicants, a group of deputies of the Sejm, and declared the contested legal norms unconstitutional. This process was the center of attention of mass media and the reason of mass protests throughout Poland. This article is the commentary on the decision, that attempts to comprehend the premises of the decision, its substantive and procedural aspects, as well as the consequences. The author concludes that the main purpose of the decision is to constitutionalize the traditionalist state policy in the field of reproductive rights. This decision is difficult to analyze in isolation from political and religious factors. The article notes that the value of the “eugenic abortion” case is not limited to legal aspects. The Constitutional Tribunal tried not only to change approaches to the correlation of competing rights (the right of an unborn child to life and woman’s rights in the context of freedom of reproductive choice), but also to increase “chilling effect”. It is expressed in the phasing out of abortion on pain of criminal prosecution.