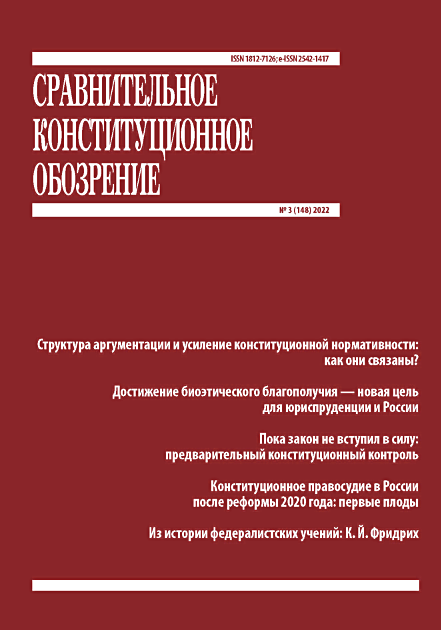 SEARCHING FOR RELEVANT ARGUMENTS: THE STRUCTURE OF CONSTITUTIONAL ARGUMENTATION

NOT ONLY FRANCE: PRELIMINARY REVIEW OF THE CONSTITUTIONALITY OF LAWS AROUND THE WORLD

NATIONAL AND INTERNATIONAL FEDERALISM IN THEORY AND PRACTICE

This article systematically presents the theoretical views of Carl Joachim Friedrich on federalism. The author shifts the focus of federalist research from the search for a genuine federalism, unique to each constructed system of government, to the plane of political processes. Consistently analysing the theories of federalism by J.Althusius, Ch.L.Montesquieu, the founding fathers of the USA, A. de Tocqueville, T.Jefferson and J.C.Calhoun, P.-J.Proudhon, the author derives characteristics of federalism as a dynamic phenomenon. Contrasting it with another dynamic organisation – empire – C.J.Friedrich calls federalism “the governing power of consent”, and empire – “the governing power of coercion”. Such consent is achieved through a political process, one form of which is federalism. As a staunch supporter of constitutionalism, the author proceeds from the fact that no political process in a constitutional state can circumvent the constitution, hence, federalism can be considered as one of the forms of constitutionalism. In this sense, C.J.Friedrich is close to the authors of The Federalist and fully shares their idea that federalism is organically interconnected with the principle of separation of powers. On this basis, the author criticises the very idea of Soviet federalism and the state-building practice based on it, since Soviet constitutionalism is a screen behind which the monopoly of power by the Communist Party is concealed. C.J.Friedrich is less critical of federalism in countries freed from colonial dependence, linking its further fate to the development of constitutionalism. The author was helped to make cautiously optimistic prognoses by the connection he discovered between federalism and democracy: the process of federalism is only possible under social conditions in which common values and objectives are shared. Those values and goals may be different, but the author favours economic gain as the key factor that unites the subjects into a federation – regardless of whether it originated from the unification of previously independent states or from the federalisation of a unitary state. On the basis of the described theoretical and historical experience, C.J.Friedrich concludes that there should be three institutions at the heart of governing the federal process: a representative body, an executive body and a judicial body. Amongst other institutional regulators of the federalism process are noted the procedures for accepting a new subject of the federation, secession, citizenship and amendments to the federal constitution. The paper concludes with an analysis of the prospects of organising the federal process to unite divided nations (Germany, Korea), to strengthen regional integration alliances (in particular, the European Communities), as well as international organisations. In the latter case, C.J.Friedrich, like I.Kant, asks the question about the possibility of creating a world federation, but unlike the great philosopher comes to a more restrained answer: if such a federal formation is to be built, then not in the immediate historical perspective. At the same time, the author points to the great potential of the UN and expresses hope for its further development.

THE INSTITUTIONAL APPROACH TO FEDERALISM: C.J.FRIEDRICH’S THEORY OF FEDERALISM AND ITS SIGNIFICANCE IN THE CONTEMPORARY WORLD

RUSSIAN CONSTITUTIONAL COURT IN 2021: REFORMED TO STAY THE SAME?