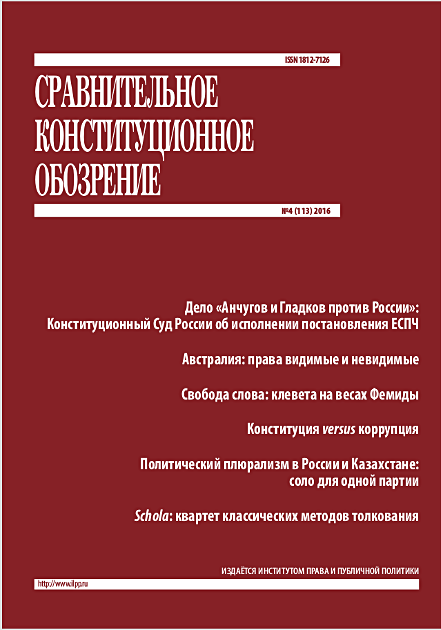 Australian constitutional model is quite unique for two reasons: first, it is based on the principle of parliamentary supremacy with no written Bill of Rights; second, it is astonishingly stable and resistant to change. Constitutional text contains few explicit rights provisions and is supplemented by a modest and unsystematic collection of implied rights recognized by the High Court of Australia. In spite of the lack of constitutional regulation of rights, the actual level of fundamental rights protection in Australia, determined by various ratings and indexes, is one of the highest in the world.

ARMENIA’S TRANSITION TO THE PARLIAMENTARY SYSTEM: PROBLEMS AND PROSPECTS

The article analyzes the goals and prospects of constitutional reforms, carried out in Armenia by the end of 2015, as well as challenges arising at the changing Armenian political scene. The author examines possible consequences of modification of the country’s political system – transition from semi-presidential to parliamentary form of government.

The article comprises analysis of the impact the international criminal justice standards, in the context of their correlation with the constitutional basics of dispensation of justice, have on contemporary Russian criminal proceedings. Special attention is paid to the criteria of categorising judgments of the European Court of Human Rights which contain broad interpretations of provisions of the Convention for the Protection of Human Rights and Fundamental Freedoms, elaborated on the basis of consensual practice, essentially establishing additional international obligations of states inter alia in the sphere of criminal law as international legal standards.

The vast majority of countries in the world have criminal defamation laws on the books. These are intended to resolve the conflict between two fundamental constitutional rights: that of freedom of expression, and that to defend one’s honor and good name (or reputation). In order to adjudicate such conflicts, legislators can choose between two approaches.

CONSTITUTIONAL AND LEGAL APPROACHES TO THE DEVELOPMENT OF ANTI-CORRUPTION ISSUES: THE MAIN ROUTES

In contrast to other legal disciplines, the science of constitutional law has for a long time paid little attention to the anti-corruption policies. Traditionally it has been mostly a domain of the criminal and administrative law. However, in recent decades, political and other social sciences, as well as the above mentioned legal sciences, have accumulated sufficient volume of consolidated knowledge that has become suitable for development for a special research field within the modern constitutional law.

The purpose of this survey is the comparative analysis of problems in establishing political parties in the Russian Federation and the Republic of Kazakhstan. As criteria for comparing party systems in Russia and Kazakhstan, the author of this article used their actual functioning, statutory concepts of political party in both countries, legally formulated requirements to political parties, due procedure of establishment and state registration of parties, existing restrictions on their establishment and activities, and the impact of the legal status of political parties on the development of the party systems as it is seen through the prism of electoral laws.

HARD TO BE A GOD: THE RUSSIAN CONSTITUTIONAL COURT AND ITS FIRST CASE ON ENFORCEABILITY OF A JUDGMENT OF THE EUROPEAN COURT OF HUMAN RIGHTS

The past two and a half years – from late 2013 to the first half of 2016 – have seen the creation of a legal framework for the resolution of conflicts between the Russian Constitution and international human rights treaties. Within this framework, the Constitutional Court of the Russian Federation has been given a central role of the guardian of “national constitutional identity”, endowed with the power to set limits to Russia’s “acquiescence” in its relations with international human rights bodies, first and foremost with the European Court of Human Rights.

SCHOLA JURIDICUM: METHODS OF INTERPRETATION OF THE CONSTITUTION

REVIEW OF JUDGEMENTS OF THE RUSSIAN CONSTITUTIONAL COURT: MAY – JUNE • 2016