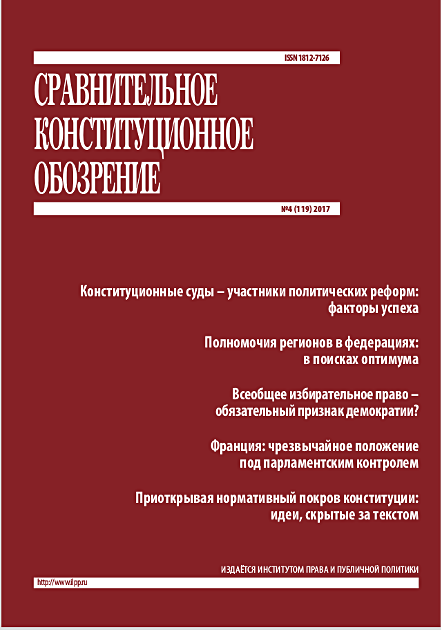 THE VOTER AS A “FUNCTION”

For over two and a half millennia democracy has undergone an evolution. It has emerged along with monarchy and aristocracy as one of three forms of state, and was for the most part perceived negatively both by antiquity thinkers such as Plato and Aristotle and modern thinkers such as Hobbes and Rousseau, although the latter did not criticize democracy in principle, instead considering it unrealistic. But since the late eighteenth century, democracy has begun to be associated with complex humanitarian values, particularly freedom, equality, and recognition of human dignity. However, the essence of democracy – which is giving power to the people – has not changed. And since this essence is reflected, among other places, in the gradual expansion of the categories of voters and has led to universal suffrage, the author believes that democracy may lose the substance for which it was enthusiastically embraced two centuries ago.

In a constitutional rupture, when the fundamental rules of political life are uncertain, it is unlikely that constitutional courts could play a major role. Yet in some remarkable cases, such courts transform into highly interventionist political actors, even achieving some success. This paper provides a series of short case studies highlighting Hungary, Russia, Turkey, and South Africa to illustrate common elements that are shared across interventionist courts in such times – namely (1) institutional centrality, (2) strong and personalized court leadership, and (3) division among elected branches of the state. All of these factors then combine with a court-derived constitutional vision that undergirds a constitutional court’s legitimacy in the extra-constitutional period, which makes the court intervention in political matters effective and successful. Among the examined cases, the vision of the so-called “invisible constitution”, created by the Hungarian constitutional court. has proven to be quite effective. In general, the Hungarian case is the most expressive one while other cases are incomplete in any sense.

It is characteristic of federal states that the scope of subnational power and autonomy are subjects of frequent dispute, and that disagreements over the reach of national and subnational power may be contested in a wide and diverse array of settings. Subnational units determined to challenge nationally imposed limits on their power typically have at their disposal many tools with which to press against formal boundaries. Federal systems, moreover, frequently display a surprising degree of tolerance for subnational obstruction, disobedience, and other behaviors intended to expand subnational authority and influence, even over national objection. This tolerance, however, has limits. In this first party of article, the authors examine a set of rulings by national constitutional courts invalidating formalized claims by subnational units to a distinctive subnational identity. The emphatically negative reactions of these courts suggest that the legal formalization of distinctive identity claims is perceived by courts to pose an unusually acute threat to the state. It is important to note that the authors included in their research only two “classical” federal states – the USA and Canada. Other examples are Italy, Spain, both of which authors themselves called “quasi-federal”, and unitary France. The latter is taken because of situation with the status of Corsica. The authors explained this choice by two points: a very few numbers of subjects’ analyzed – judicial rulings, and similarity of approaches to the cases and final decisions by the courts.

From 14th November 2015 to the present time, a state of emergency (état d’urgence) has been declared over the all territory of the French Republic to address an immediate terrorist threat. For this reason, there was an urgent need to provide for an adequate parliamentary control to reconcile the effective counter-terrorist measures within extended executive powers with protection of human rights. Thus, the article first deals with the constitutionality of the restrictive measures put in place by the state of emergency which were made by the parliamentary statute while it is not mentioned by the French Constitution of 1958. At the same time the state of emergency is distinguished from other forms of so called “crisis situations” – measures taken by President according to the Article 16 of the French Constitution and the stage of siege. The impossibility of launching measures under these two regimes in the current situation in France is also explained.

IS THE RIGHT TO ACCESS THE INTERNET A NEW HUMAN RIGHT?

The article raises the issue of recognizing access to the Internet as a new human right, the emergence of which on the “agenda” of constitutional and legal science is due to the intensive development of information technology. The author makes a brief exploration into what the Internet is, both as a phenomenon and as a significant product for society, and the purpose behind its nature of access. Here, the thesis about the ideological and technological factors that determine the person’s ability to use the Internet is put forth. In some states, the right to access the Internet has already been secured. To determine the degree of detail of the idea of the right of access to the Internet, we studied the rules of the legal systems of the following countries: Greece, Nepal, France, Estonia, Finland, Costa Rica, Russia.

ESSENTIA CONSTITUTIONIS: THE CONSTITUTION OF THE RUSSIAN FEDERATION IN THE FOCUS OF CONSTITUTIONAL THEORIES OF THE 20TH AND 21ST CENTURIES. PART 1

REVIEW OF SELECTED RULINGS OF THE RUSSIAN CONSTITUTIONAL COURT: MAY – JUNE • 2017