The corporate model of local government 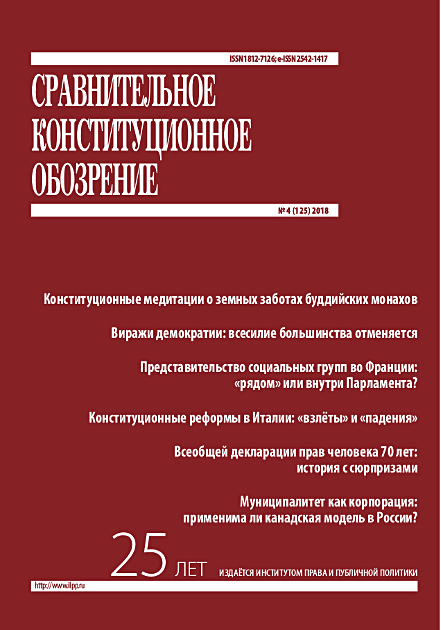 Local government is given the special role in Russia’s constitutional order of ensuring effective cooperation between the state and civil society. The dual nature of local government is connected with the problems of balancing its state and societal beginnings so that the democratic elements serve as a check on the self-will of the bureaucracy and that economic growth served the social welfare of all. This book review analyzes the monograph of A.A.Larichev, which proposes a new view on the relevant problems of local government through prism of of understanding its models, which are identifiable according to subjective attributes – depending on the role of the population (commons, collective, etc.) in deciding significant local issues. This book review considers the virtues and vices of such a methodological approach and its potential for sociology and the humanities. This review substantiates the actuality and theoretical and practical significance of Larichev’s systemic research into Canada’s corporate model of local government, where democracy lacks determinative meaning. It is shown that, despite this, the corporate model is capable of not weakening, but rather stimulating the institutes of government by the people if one considers the model as the foundation for a complex guarantee of legal capacity and competence for local societies that are deciding subjects of municipal democracy. In light of Canada’s experience, Larichev has undertaken a grand scientific study on the problems of local government that is based on a rational union of academic continuity and originality and on conceptual methodological and practically oriented approaches.