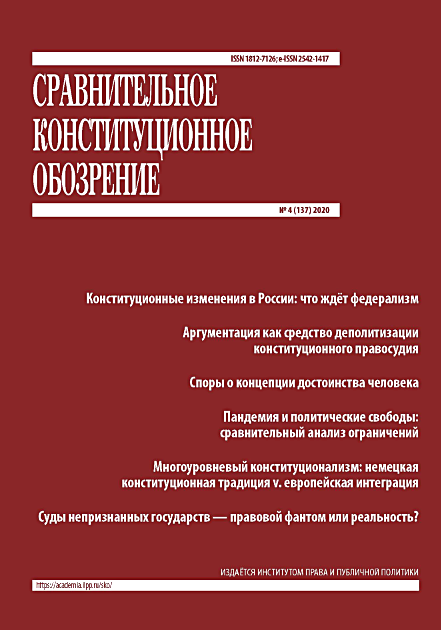 The article aims to study the constitutional aspects of further European integration in light of the COVID-19 pandemic. First, the COVID-19 pandemic is a serious challenge for the new European Parliament and the new College of the European Commission. After a controversial first 100 days in power, Ursula von der Leyen’s team faced the necessity to strengthen its leadership but also to come closer to implementing its election promise of economic and societal transformation within the European Union. This transformation includes internal structural reform. Second, the pandemic has exacerbated a key contradiction within the EU’s legal structure – the conflict between the sovereignty of member states and the powers of the EU institutions. The author examines this contradiction through the prism of philosophical debates on the nature and future of a single European state.

THE CHALLENGES OF THE PANDEMIC: RESTRICTIONS OF FREEDOMS OF ASSEMBLY AND SPEECH IN THE LIGHT OF THE PROPORTIONALITY PRINCIPLE

As a response to the global SARS-CoV-2 pandemic, many countries have imposed restrictions on fundamental constitutional rights and freedoms, including freedoms of speech and assembly. The rapid spread of the understudied virus and the rise of the emotional tension within the society compelled the state authorities to adopt prompt measures to contain the virus. Unfortunately, the situation did not allow the decision-makers either to assess the specific aims of the restrictions or to consciously select the most adequate and least restrictive measures to fight the new virus. As a result, the legal systems have been infiltrated not only by the necessary limitations, but also by excessive and ineffective restrictive measures that are not suited to contain the infection and are incompatible with the principles of a pluralistic democracy. The article scrutinizes the latter statement focusing on anti-COVID-19 measures that impose restrictions on freedoms of peaceful assembly and speech.

WHEN POLITICAL QUESTIONS AND CONSTITUTIONAL JUSTICE MEET: THE STARTING POINTS OF ARGUMENTATION IN A COMPARATIVE PERSPECTIVE

METAMORPHOSES OF THE RUSSIAN CONSTITUTION

Russia’s 2020 constitutional reform was rapid and ambitious. The reform set not only new tasks for the legislator, but also posed a serious challenge for the science of constitutional law. Many well-known interpretations of constitutional principles require rethinking. This concerns largely issues of the federal structure and local self-government, which are still not a topic of public and expert discussions. At the same time, there is a need to determine the place of the amendments on the Russian state identity in the institution of the federal structure as well as to define the content of the principle of the unity of the public power system. This principle cannot be reduced to the hierarchical dependence of the state and local government bodies, because this approach contradicts the constitutional principles of federalism and the organizational independence of local self-government. The unity of the system of public authority does not exclude the independence of the subjects of the Russian Federation in defining their own system of public authorities.

CONSTITUTIONALIZATION OF THE HUMAN DIGNITY CONCEPT

It’s impossible to imagine a modern constitution without provisions on human dignity. This concept has an impact on human rights provisions and is a necessary component of constitutional statehood. At the constitutional level, human dignity can be positioned as a principle of law that defines the goals or grounds for the adoption of the Constitution, a specific human right or as a ground for permissible restriction of constitutional rights and freedoms. Some constitutive acts enshrine the collective dignity of social groups or peoples, but this approach is not very common. The concept of dignity is an open one, it applies to all areas of human activity. In spite of its universal recognition, the interpretation of this concept is largely determined by the specific characteristics of the constitutional development of a particular country.

THE COURTS OF QUASI-STATE ENTITIES: TOWARD FORMULATING THE ISSUES

This article is devoted to the functioning of the judiciary in poorly studied political entities – unrecognized states. Particular examples of marginal statehood are reviewed, ranging from Colombian “selva” to separate areas of Donetsk and Lugansk regions of Ukraine. A typology of such judiciaries is shown, with the factors that prompt political elites of incipient state entities to create courts. The complexity of the ethical choice that a judge who was a servant of the “parent” state must make, when he or she enters the service of an unrecognized state, is emphasized. Corresponding statistics are given in connection with the transition of Ukrainian judges to the service of the self-proclaimed DPR and LPR. The author analyzes various options for the relationship of professional judges and young passionate followers endowed with de facto powers of judicial status.

THE RULE OF LAW AND STANDARDS OF RESTORATIVE (CONCILIATORY) JUSTICE: INSTEAD OF A FOREWORD

Restorative Justice – which shifts from defining a crime as a breach of law to defining it as causing harm to an individual – is gaining ground in the criminal justice systems of countries on different continents. Different restorative justice programs such as mediation, peacemaking circles, family group conferences and their combinations are positioned as individual, flexible approaches to every crime committed: these practices give citizens the possibility to choose a solution that is the most acceptable personally to them. Adoption of international standards on restorative justice in criminal matters by the most authoritative international organisations such as the Council of Europe and the United Nations confirms these tendencies. Inclusion of the informal practices into criminal proceedings requires a criminal justice system organisation that makes it possible for the rights of all of the participants to the restorative justice programs to be respected. In this regard, all of the international documents on restorative justice in criminal matters pay attention to the necessity of application of the procedural guarantees to restorative justice including the right of an accused to a fair trial.