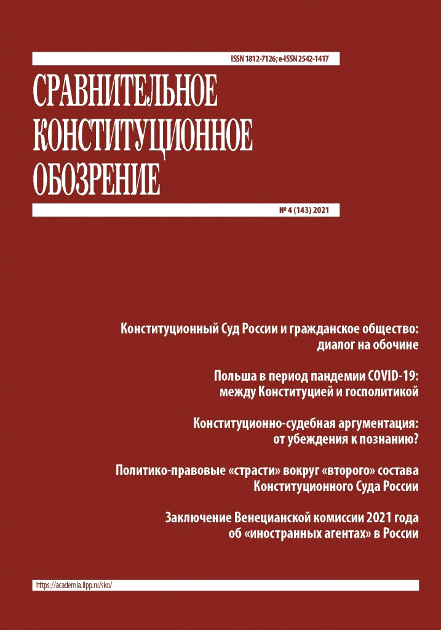 CONSTITUTIONAL JUSTICE AND CIVIL SOCIETY IN SEARCH OF DIALOGUE

LAW IN A TIME OF CRISIS

STATE OF EMERGENCY IN POLAND: CONSTITUTIONAL REGULATION AND “HYBRID” NATURE DURING THE COVID-19 PANDEMIC

TO PERSUADE OR NOT TO PERSUADE? ON THE PURPOSE AND FUNCTIONS OF CONSTITUTIONAL ARGUMENTATION

The article examines the institution of a “foreign agent” that appeared in Russian legislation in 2012. The author, analyzing American legislation, the position of the Venice Commission, the Office for Democratic Institutions and Human Rights of the Organization for Security and Cooperation in Europe (hereinafter – the OSCE/ODIHR), the decisions of the Constitutional Court of the Russian Federation, as well as the existing Russian judicial practice, comes to the conclusion that ’misappropriation’ status of a foreign agent by the Ministry of Justice of Russia for non-profit organizations (hereinafter – NPOs) occurs in the absence of clear legal definition of the term “political activity”, does not correlate with the identification of the real connection and activities of NPOs on the order or instruction of a foreign donor, and is actually applied in those cases when it comes to appeals to government agencies, criticism of government agencies or assessment of their decisions. All this indicates that the purpose of the restrictions imposed by the state was by no means a desire to ensure transparency and openness through access to information about foreign financing of non-profit organizations, but rather the purpose was to politically stigmatize and impose additional organizational and financial burdens on NPOs, which dare to criticize the authorities. The author advocates the complete abolition of this institution of a foreign agent, since the pre-existing Russian legislation already made it possible to exercise control over the financing and activities of NPOs. The expansion of the number of types of foreign agents, introduced since December 2019 (first in terms of recognition by media as foreign agents), led by December 2020 to the appearance in Russian legislation of individuals of foreign agents and foreign agents-unregistered public associations and even greater and disproportionate restrictions on the constitutional the right to association. Moreover, the status of a “foreign agent” (in relation to a candidate for an elective office and a candidate affiliated with an acting foreign agent) is supposed to be introduced into the electoral legislation with the obvious goal of political stigmatization of persons trying to exercise their passive electoral right.

RUSSIAN FEDERATION: OPINION OF THE VENICE COMMISSION NO. 1014/2020 DATED ON 6 JULY 2021 ON THE COMPATIBILITY WITH INTERNATIONAL HUMAN RIGHTS STANDARDS OF A SERIES OF BILLS INTRODUCED TO THE RUSSIAN STATE DUMA BETWEEN 10 AND 23 NOVEMBER 2020, TO AMEND LAWS AFFECTING “FOREIGN AGENTS”

In the adopted at the 127th plenary session Opinion Venice Commission analyzed the objectives and rationale for the legislative amendments to the laws affecting “foreign agents”; expanding the range of individuals and legal entities that can be designated as “foreign agents”; expansion of administrative requirements and restrictions for “foreign agents”; expansion of sanctions for violation of these requirements and restrictions. The Commission concluded that the adoption of these amendments constitutes a serious violation of fundamental human rights, including freedom of association and expression, the right to privacy, the right to participate in public affairs, and the principle of non-discrimination and expressed especial concern about the cumulative impact of the latest amendments on organizations, individuals, the media and civil society in general.

The modernisation of the Constitutional Court of the Russian Federation in 1993–2000 was a result of the political and legal transformations of the 1990s, and the period of its procedural inaction for a year and a half was by no means time lost. It was used to prepare a new law for the Constitutional Court, which was largely prepared by the Court itself and accompanied by disputes with the State Legal Department of the Russian Federation’s president and various factions of the State Duma of the first assembly (LDPR, KPRF). Discussions were primarily held about the status of the Constitutional Court, such as the Court’s term in office, as well as its number of members, which greatly determined the effectiveness of the future “second” Constitutional Court of the 1993–1995 model and its internal structure. Filling the Constitutional Court’s six vacant seats as defined by the 1993 Constitution was not carried out by electing judges as in the previous legislation, but instead by appointing them to each of the chambers on the suggestion of the head of state. This predetermined an acute political struggle, primarily to establish the procedure for selecting candidates for judicial positions and determining the role of the president in each chamber of the Federal Assembly, the State Duma factions, legal institutions, and scientific communities of legal scholars. The independent “game” of each of these elements delayed the process of starting a functioning Constitutional Court for many months, but the democratic procedure for electing the courts’ heads allowed the issue to resolve without delay.