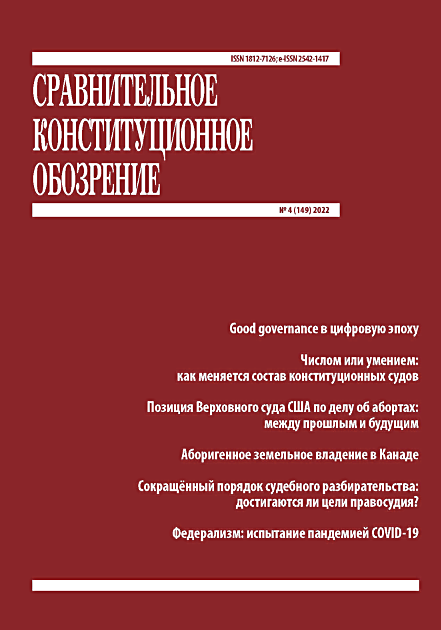 THE RIGHT TO GOOD GOVERNANCE IN THE DIGITAL TRANSFORMATION ERA

CHANGING THE NUMBER OF JUDGES OF CONSTITUTIONAL COURTS: WORLD PRACTICE AND RUSSIAN EXPERIENCE

Russian judicial reform that started in 1991 with the adoption of the Judicial Reform Concept Paper by the then Parliament – the Supreme Soviet (Council) of the Russian Soviet Federative Socialist Republic – was several times declared completed including by the Supreme Court President Vyacheslav Lebedev but is still ongoing. During those years new waves of reform lost its primary objective of strengthening independence and impartiality of the judiciary and became ever more technical, mostly aimed at decreasing the workload of courts and increasing their efficiency. There is nothing new in such an approach. In many countries similar measures were implemented due to shrinking budgets and heavier workloads but in Russia excessive preoccupation with efficiency almost destroyed the due process, especially in criminal trials where about 70% of cases were resolved without due court hearings because of the plea agreement or cooperation agreement entered into. Plea bargaining is one of the most popular forms of criminal procedure simplification. During last decades the use of plea bargaining by both common law and civil law countries increased substantially. Currently in the US ninety-seven percent of federal convictions and ninety-four percent of state convictions are the results of guilty pleas. European countries also demonstrate the intention to avoid lengthy and scrupulous criminal procedure rules. Council of Europe Committee of Ministers, when preparing its proposals for member states on simplification of criminal procedure, recommends such order of judicial proceedings where “plea bargaining or similar procedure shall be implemented according to which the offender is to announce publicly if he/she accepts the charges. In such cases the court shall have an opportunity to skip further investigation and move to the consideration of the offender’s personality.” Russian new Criminal Procedure Code adopted in 2001 seems fully in line with this recommendation as it includes the possibility for the defendant to enter into different forms of plea agreement. But although Russian special trial procedure and the plea bargaining are looking similar they substantially differ. In this article we are going to demonstrate how the pursuit for judicial efficiency in Russia led to further deterioration of its judicial system.

LAW IN THE PERIOD OF CRISIS

MODERN FEDERALISM IN THE CONTEXT OF THE COVID-19 PANDEMIC

The experience of countering the COVID-19 pandemic in modern federations has revealed both the advantages and disadvantages of this form of state territorial structure in the fight against this public health threat. Complicated mechanisms of division of power between a federation and its subjects sometimes made it difficult to respond immediately to an emergency situation, leading to longer periods for coordinating planned actions. At the same time, in federal states it was possible to apply more flexible and differentiated approaches to individual territories and to use existing mechanisms of coordinating and harmonizing the actions of public authorities at various levels. There is a general consensus that federalism, on the whole, stood the test of the pandemic, although certain shortcomings in current institutional frameworks were exposed. The form of state territorial arrangement itself has hardly been the primary factor in determining the success or failure of a particular country in its fight against the COVID-19 pandemic. Among federations there were both states that successfully coped with the pandemic (Australia) and ones that experienced tangible problems in the fight against it (the United States). More significant were various geographic, demographic, historical, economic and cultural factors that determined the final results of countering COVID-19 in a particular state. In the context of the fight against the pandemic and the crisis caused by it, there was a natural strengthening of the role of federal institutions due to some weakening of the separation of powers both vertically and horizontally. The lessons of the pandemic have confirmed the important role of political parties and the party system, which may serve as both a unifying and a disintegrating factor. This was most clearly confirmed by the example of the United States, where the fight against COVID-19 took place against the backdrop of an acute electoral struggle between the Republican and Democratic parties. The experience of combating the spread of COVID-19 has also shown that those countries which coped with the pandemic more successfully had a governmental body at the federal level which made the most important decisions and coordinated the efforts of public bodies of different levels. This helped to combine coordination at the federal level with differentiation at the regional level.

CONTRA CONSTITUTIONEM LAW DEVELOPMENT BY THE PARLIAMENT OF ARMENIA

AND THE DARKNESS HAS COME: THE U.S. CONSTITUTION DOES NOT PROTECT THE RIGHT TO ABORTION ANYMORE

In December 2021, the Supreme Court of the United States heard arguments in the case of Dobbs v. Jackson Women’s Health Organization. Mississippi’s Gestational Age Act, which prohibited abortions after 15 weeks of pregnancy, was subject to constitutional review. On June 24th, 2022, the Supreme Court issued its opinion having held that the U.S. Constitution does not guarantee a right to abortion. In doing so, the Court overruled two landmark decisions – Roe v. Wade and Planned Parenthood of Southeastern Pa. v. Casey – issued by the Court in 1973 and 1992, respectively. The author of this article attempts to trace these developments chronologically and to put the Supreme Court abortion jurisprudence in both legal and political contexts. The primary part of the article is an analysis of the Dobbs decision, namely the majority opinion, several concurring opinions, and the dissenting opinion. Based on the text of the decision and points made by legal scholars in academic works and public comments, the author identifies factual and methodological flaws in the majority opinion and speculates how exactly the overruling of these landmark precedents might affect other constitutional rights guaranteed by the Supreme Court both before and after 1973. Analyzing the legal consequences of the Dobbs decision, the author concludes that the returning of the issue of abortion to the states does not simplify the situation, but, on the contrary, potentially invites a large number of jurisdictional disputes between the states, overflowing the federal court system. It is also noted that federal lawmakers could codify the right to abortion. However, taking into account the current political environment and the balance of power in the U.S. Congress, this scenario does not seem very plausible. Finally, the author discusses whether the legitimacy crisis of the Supreme Court is a part of a global trend and whether there might be a future need to reimagine the very institution of constitutional review.