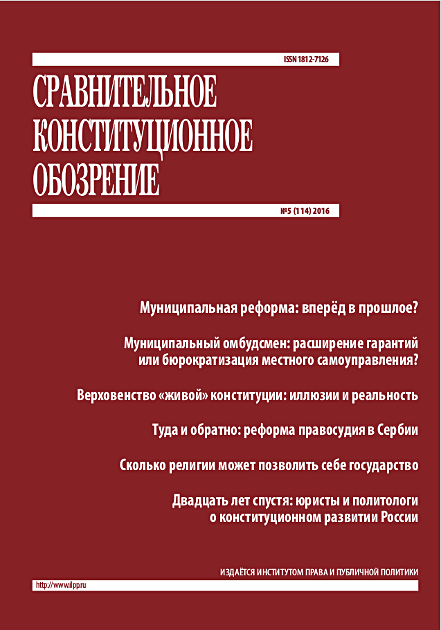 THE MIRROR LABYRINTH OF MUNICIPAL REFORM: THE CONSTITUTIONAL COURT PRACTICE AS A WAY-FINDER THROUGH A MAZE

The Russian Constitution establishes the local self-government as one of the fundamental democratic values and the foundation of the constitutional order. However, the practical work of municipal bodies indicates that the process of development of local democracy is rather slow and does not seem irreversible. Municipal reform has in many aspects lost its clear meaning and turned into a mirror labyrinth of real politics. The faith in the salvaging role of centralized authority, inherited from the past, though not fully groundless in turbulent times, in the end leads the local communities and the whole society into the trap of bureaucratic crisis. In realities of our country, the state is often inclined to consider the local government simply as an agency servicing its own administrative and political interests. And there is also a functional, organizational and legal subordination of the municipal authorities to the machinery of the centralised state.

THE MUNICIPAL REFORM IN THE FOCUS OF THE RUSSIAN CONSTITUTIONAL COURT: NEW SUBSTANTIVE AND PROCEDURAL APPROACHES

This paper presents a survey of the decisions of the Constitutional Court of the Russian Federation in autumn-winter 2015 on the organization of local self-government, as well as on the exercise of power and administrative authority of local governments at the new stage of municipal reform. This stage started after amendments made by two 2014 Federal Laws to the basic municipal law on local and municipal government, followed later by a couple of other federal Acts (including relevant changes in the Budgetary Code).

MUNICIPAL OMBUDSMAN: INTERNATIONAL EXPERIENCE AND ITS RECEPTION IN RUSSIA

One of the modern tendencies in functioning of the special officers in charge for the protection of the rights of man and of the citizen (ombudsman) in many countries is further extension of their functions and specialization. This article discusses the features of functioning of the institute of municipal ombudsmen in the United States, Canada, Holland and other countries. The relevance of this institution is testimony to the insufficiency of other forms of control over the local administration. Worldwide legal experience in this field is analyzed to identify positive and negative factors in its reception in the Russian context.

OMBUDSPERSONS’ CONTROL OVER MUNICIPAL AUTHORITIES: THE CANADIAN EXPERIENCE AND ITS APPLICABILITY IN RUSSIA

The institution of ombudsman takes a special niche in the framework of the rights and freedoms protection and is an important instrument of guaranteeing it. This article shows functioning of this institution in Canada, including ombudspersons’ activities in current control over municipal authorities and other local governments in the context of their relations with the public. Canada’s experience in this sphere is also compared with the conditions and practices of the ombudspersons’ control over municipal authorities and other subfederal governments in Russia. The author describes the development of the institution of ombudsman in Canada as well as the increasing involvement of ombudspersons in the “watchdog” control over municipal and local governments. In many ways, these processes are associated with the evolution of the legal status of municipalities, increased autonomy of local governments and expansion of their powers.

A LIVING JUDICIARY FOR A LIVING LAW: CONSTITUTIONAL TRANSITIONS AND GOVERNMENTAL CHECKS AND BALANCES

Most countries in Europe, since 1945, have experienced a transition of constitutional régime. The outcome of such a process entails going beyond the 1800th century “law-governed state” (Etat de droit, Rechtsstaat) and achieving the establishment of the “constitutional law state” (Etat de droit constitutionnel, Verfassungsrechtsstaat). Mainstream European constitutionalism relies to a large extent – although not without controversial features – on judicial review of constitutionality as a means for ensuring the priority of the constitution over other sources of law, thus limiting the political discretion of the political lawmaker (Parliament), although democratically elected, and introducing the traditional principle of separation of powers into a wider framework of checks and balances, inclusive of non-majoritarian guarantees such as the judiciary at large and, in particular, constitutional courts. The text of the Russian constitution reveals a plurality of normative connections with the category of the “constitutional law state” resulting from a comparative research.

THE MYTH OF JUDICIAL REFORM IN SERBIA

In October 2000, after years of façade democracy widely identified with Milošević’s autocratic rule, Serbia entered a genuine process of democratization. In the aftermath of the authoritarian regime, one of the top priorities was to adapt judiciary to democratic governance, because during the period of Milošević rule, the judiciary became the most corrupted branch of the government, completely deferential and obedient to its will. The judicial reform was implemented upon the set of laws adopted in December 2008 and the comprehensive reapportionment of all judges and prosecutors initiated at the same time. By January 2010, more than 700 of the 3,000 judges, who had permanent tenure, left non-elected and practically dismissed in nontransparent selection process.

THE PROCESSES OF SECULARIZATION AND CLERICALIZATION IN THE MODERN WORLD: SEEKING FOR A CONSTITUTIONAL BALANCE

The main idea of the article is that the secular state principle is just a general trend being neither realized in real life nor even fixed by law. Most of the modern states are, to different extent, priest-ridden ones. Above all, in the modern world there is a trend towards clericalism growth that is opposite to the development of the secular state principle. Indeed, most of the modern states give ideological, financial, cultural, political, administrative and (or) legal preferences to some religion(s) or religious organization(s). The author analyzes each of those preferences and comes to the conclusion that their number and combination type determine a level of clericalism in each modern state in particular. There are being investigated processes, trends and reasons for secularization and increasing clericalism in modern states.

The article includes the review or some prominent researches devoted to the problems of evolution of political regime in Russia and published in last five years. The main subject of analysis – the reflections or Russian authors on the problems of the democratization in 1980–1990, collapse of USSR, evolution of the political and law institutes in Russian Federation. According to author of the article, Russian historians and philosophers have quite explained the reasons of the unfortunate results of the reforms, attempts of modernization. The pressing issue of the economic modernization of Russia is impeded by the political system of Russia which rejects all the attempts to modernize it. The existing contradiction has resulted from the process of the formation of market institutions and mechanisms under the conditions of absence of political culture of democracy.

REVIEW OF JUDGEMENTS OF THE RUSSIAN CONSTITUTIONAL COURT: OCTOBER • 2016