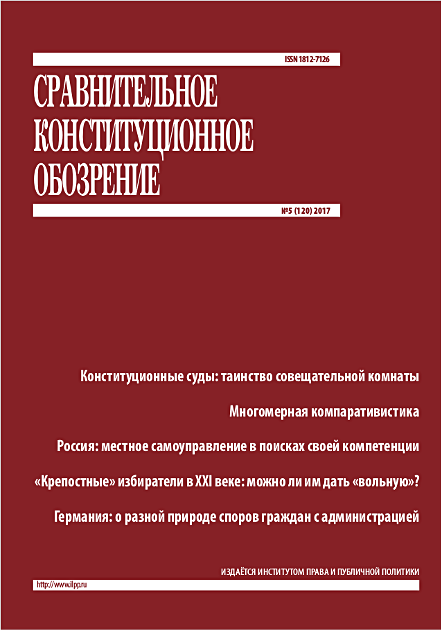 CULTURES OF DELIBERATION IN CONSTITUTIONAL COURTS

The article provides an overview of two models of judicial decision-making that differ in the kind of judges’ communication and collaboration. In the seriatim model, judges sequentially articulate their opinions about the decision in a conference. These opinions are not discussed any more. The reasons for the decision, if any, are a collection of individual opinions. In the per curiam model, on the contrary, the court tries to work out reasons that can be accepted by all or by as many as possible judges that consider the case. In both models, a ruling of a court is adopted by voting. The seriatim model had been established first and still influences the Common law tradition. Afterwards, the per curiam model evolved in the later Middle Ages in Europe; nowadays this model is preferred in the Civil law tradition. Meanwhile, both models have converged by the mutual exchange of several properties.

In a constitutional rupture, when the fundamental rules of political life are uncertain, it is unlikely that constitutional courts could play a major role. Yet in some remarkable cases, such courts transform into highly interventionist political actors, even achieving some success. This paper provides a series of short case studies highlighting Hungary, Russia, Turkey, and South Africa to illustrate common elements that are shared across interventionist courts in such times – namely (1) institutional centrality, (2) strong and personalized court leadership, and (3) division among elected branches of the state. All of these factors then combine with a court-derived constitutional vision that undergirds a constitutional court’s legitimacy in the extra-constitutional period, which makes the court intervention in political matters effective and successful. Among the examined cases, the vision of the so-called “invisible constitution”, created by the Hungarian constitutional court. has proven to be quite effective. In general, the Hungarian case is the most expressive one while other cases are incomplete in any sense. However, they are valuable from the cognitive point of view.

It is characteristic of federal states that the scope of subnational power and autonomy are subjects of frequent dispute, and that disagreements over the reach of national and subnational power may be contested in a wide and diverse array of settings. Subnational units determined to challenge nationally imposed limits on their power typically have at their disposal many tools with which to press against formal boundaries. Federal systems, moreover, frequently display a surprising degree of tolerance for subnational obstruction, disobedience, and other behaviors intended to expand subnational authority and influence, even over national objection. This tolerance, however, has limits. In this first party of article, the authors examine a set of rulings by national constitutional courts invalidating formalized claims by subnational units to a distinctive subnational identity.

The comparative method in the field of constitutional law enjoys deserved success. However, at the same time it raises a number of important methodological questions. One of these questions is connected to the boundaries of comparative constitutional research, as determined by a more or less careful treatment of the involvement of theoretical constructions and research practices utilized by other disciplines. At least in the Russian scientific community there is a rather wide range of positions on this issue, ranging from the recognition of all genuinely scientific knowledge as interdisciplinary in nature, to the desire to limit oneself within the framework of legal disciplines, and to the study of strictly legal phenomena. It is between these “extremes” that the middle positions can be found that allow for interdisciplinary approaches, albeit with some prudence.

ESSENTIA CONSTITUTIONIS: THE CONSTITUTION OF THE RUSSIAN FEDERATION IN THE FOCUS OF CONSTITUTIONAL THEORIES OF THE 20TH AND 21ST CENTURIES. PART 2

IS IT POSSIBLE TO ABOLISH “SERFDOM’S” ELECTORAL RIGHT IN RUSSIA?

This paper provides a short review of the concept of a public right (subjektives öffentliches Recht), which is a key idea of the current German state theory. This text was originally written for educational purposes and has traditionally been addressed to students who are learning public law at German universities. Bearing this in mind, the authors have reviewed the development history of the concept that highlights the relationship between public rights and legal protection provided by courts. The current definition of a public right is based on the definition given by Rudolf von Jhering in 1872, which states that a right is a legally protected interest. In German theory, a public right is described as the legal power of an individual to demand something from state authorities that are behaving in a certain manner (such as action, permission, or refrainment) in order to pursue his interests.