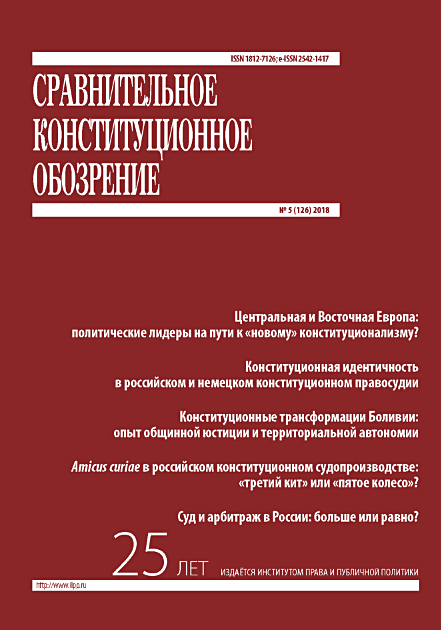 CONSTITUTIONALISM AND POLITICAL LEADERSHIP IN CENTRAL AND EASTERN EUROPEAN COUNTRIES: CHALLENGES AND PERSPECTIVES

This article emphasizes that Bolivia has embarked on a new stage in the development of constitutionalism, due to the need to overcome the previously existing deficit of democratic elements in the organization of state and society, as characterized by social inequality and cultural homogenization. The national Constitution establishes a radical concept in the approach of power to the people. At the same time, the most important ideological component of the Bolivian constitution is an attempt to break ties with neoliberalism.

THE RIGHT TO BE HEARD: AMICI CURIAE BRIEFS IN RUSSIAN CONSTITUTIONAL COURT

Non-governmental organizations in Russia have accumulated experience in preparing and providing the Constitutional Court of the Russian Federation amici curiae (“friends of the court’s”) briefs. In theory and practice, “friends of the court” are considered to be those who provide the court with useful information that has a bearing on the current case and the court can use this information to reach the decision. The Constitutional Court of the Russian Federation calls these briefs “initiative scientific opinions”, with the term being confirmed in 2017 in the Rules of the Constitutional Court. The purpose of this article is to assess whether amici curiae briefs influence the Court’s decisions.

NO LESS THAN A TRIAL: THE CONSTITUTIONAL NATURE OF ARBITRATION IN THE RUSSIAN LEGAL SYSTEM

In the modern world, the effective realization of the tasks of justice is largely determined by the development of alternative jurisdictional institutions (as opposed to state-run court systems), including arbitration. Arbitration is a method of resolving civil and other legal disputes that is generally recognized in legal society and that is based on the autonomy of will and equality of subjects of legal relations, as well as broad procedural discretion. Arbitration is a private jurisdictional activity and is a characteristic of self-organization in civil society, which is called upon to play a key role in the development of the rule of law. However, it cannot be opposed to the standards of justice, namely the standards of independence, impartiality, and fairness, which are of a general jurisdictional character.

WE, THE MULTINATIONAL PEOPLE OF THE RUSSIAN FEDERATION…

The concept of “the People”, being interdisciplinary, is applied in various sciences, each of which highlights its specific content and denotation. In sociology this term designates a community united by a single territory of a state, as well as by firm economic, social, and spiritual connections and relations. In ethnography the people are considered to be an ethnic community united by a common language, origin, specific culture, particular way of life, traditions and customs, national consciousness, a common selfchosen name, and self-identification. Such a concept has an explicit and definite correlation with empirical reality – with real people who, interacting with each other, enter into concrete social relations. In the constitutional legal conceptual space, whose “inhabitants” are abstract legal constructions, legal phantoms and fictions, the people act as the bearer of Comparative Constitutional Review sovereignty and the source of power. However, in the scientific comprehension of this ideally typical constitutional model, the empirical notion of the people as a community is often used, which does not allow one to adequately reveal the regularities underlying Russian statehood, and leads to the emergence of a contradiction forming a methodological problem, the study of which this article is devoted to.