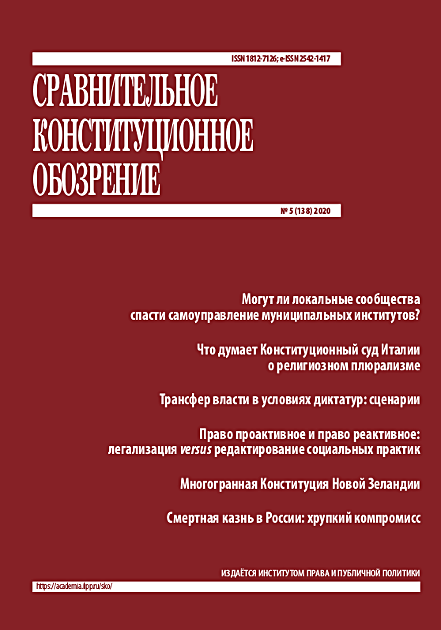 The article is devoted to the possibility of changing power within regimes that are considered authoritarian (or hybrid). The practice of some such regimes shows that they still allow for a real and sometimes even regular change of power, without changing their character and, in fact, without allowing the real functioning of democratic institutions. Special attention is paid to the States formed in the space of the former USSR. It is noted that the post-Soviet authoritarian regimes can be separated into a separate subspecies. The article discusses the following options for transferring power under an authoritarian regime.

The article examines the genesis of the Constitution of New Zealand, the formation of its constituent parts and the main sources of constitutional law; it generally profiles the Constitution. The article shows the mutual influence and interweaving of the components of the unconsolidated Constitution of New Zealand in contemporary conditions. In particular, the constitutional provisions presented in the Treaty of Waitangi are examined, and attention is focused on the contemporary problems of its current interpretation and application, although the historical context of its drafting and conclusion is shown. The article deals with the interpretation of some basic constitutional terms when using different official languages of New Zealand, first of all Maori and English tongues.

PROACTIVE LAW AND REACTIVE LAW: TRANSFORMATION OF LEGAL SYSTEMS IN THE FACE OF GREAT CHALLENGES

The paper substantiates the thesis that the distinction between proactive and the reactive rulemaking [lawmaking] becomes much more distinct and significant in crisis periods of societal development. In such periods, when social systems face huge challenges, the corresponding transformation of legal systems either follows the logic of preserving existing institutions and values (reactive law), — alternatively — goal-setting is based on lawmaking aimed at transforming the social reality (proactive law). Both proactive and reactive lawmaking can come into conflict with the existing constitution, moving society to change it by bringing it into compliance with changed goals and values or changed social realities.

THE PRINCIPLE OF SECULARISM OF THE STATE IN THE DECISIONS OF THE CONSTITUTIONAL COURT OF ITALY: ALL ROADS LEAD TO ROME

The main characteristics of the European approach to the understanding of state secularism in many respects is based on the interpretations of Article 9 of the 1950 European Convention for the Protection of Human Rights and Fundamental Freedoms by the European Court of Human Rights are, on the one hand, private freedom of faith, civil and political equality of citizens regardless of their confession, and non-discrimination, and on the other, the autonomy of religious communities from the state and the non-interference of religious organizations in public governance. The article shows the special way these values were implemented in the Italian state from the moment of drafting and adoption of the Constitution in 1947 to the present time.

LOCAL COMMUNITIES AS A TOOL FOR THE DEVELOPMENT OF MUNICIPAL DEMOCRACY: GERMAN EXPERIENCE AND LESSONS FOR RUSSIA

Local government as a political, legal and social institution finds itself in a very difficult period of development in Russia. The long-established tendency of its subordination to the state has intensified today in connection with the newly adopted constitutional amendments. At the same time, it seems obvious that further “embedding” of local government into the state management vertical, in the absence of any positive effect in terms of solving socio-economic and infrastructural problems, will inevitably lead to other hard to reverse, negative results both for local government institutions and the system of public authority as a whole. The normal functioning of local government requires, however, not only the presence of its sufficient institutional and functional autonomy from the state, but also an adequate territorial and social base for its implementation.

DEFENSE OF LOCAL AUTONOMY IN THE CONSTITUTIONAL COURT OF SPAIN

BETWEEN THE HAMMER AND THE ANVIL: THE RUSSIAN CONSTITUTIONAL COURT’S POSITION ON THE ABOLITION OF THE DEATH PENALTY

The key factor in maintaining a moratorium on the death penalty in Russia is its membership in the Council of Europe, which requires compliance with the European Convention for the Protection of Human Rights and Fundamental Freedoms and the abolition of the death penalty. One of the proponents of maintaining Russia’s adherence to the Convention is the Russian Constitutional Court. However, the return of the death penalty as a capital punishment finds some support in Russia. Therefore, the Constitutional Court has to maintain a balance between two forces: internal pressure from public opinion and a number of conservative government representatives, and fidelity to the fundamental principles of the Russian Constitution and international law, backed up by international obligations undertaken by Russia.