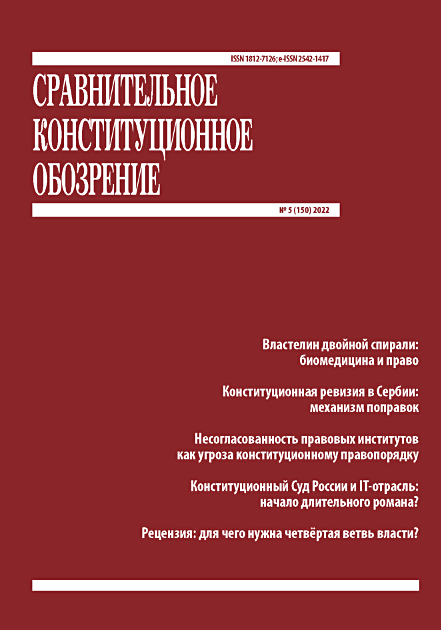 In the last 10 years, 131 countries out of 180 have made no significant progress in fighting corruption, Transparency International (TI) reported in January 2022. This demonstrates, once again, that new approaches to counter corruption need to be found. Constitutional law theory may be helpful here. The concept of an anti-corruption principle in constitutionalism, introduced in 2009 by Prof. Zephyr Teachout, remains an underappreciated legal concept. This principle declares that constitutionalism provides inherent anti-corruption tools which allow preventing corruption, combating it, and liquidating its consequences. This paper reviews the constitutions of many nations to discover, surprisingly, how different countries have written into their basic laws the same integrity support provisions. The few Russian authors who have done such reviews classified their findings based on regional perspectives. In contrast, we suggest that similar concepts appear in countries with very different legal and political cultures. Sometimes countries like Brazil and Ukraine has more common, than Malaysia and Singapore. This proves for another time that there are universal anti-corruption constructions, such as division of powers, parliamentary and judicial oversight etc., which are used to secure the integrity in countries with very different background. Therefore, the classification ought to be institution-based, not territorial based. More importantly, the emphasis should not be on declarations of anti-corruption commitment but on specific provisions limiting monopolies and official discretion, as well as ensuring transparency and accountability. Indeed, while countries like Equatorial Guinea prescribe anti-corruption commitment with one of the worst corruption perceptions score (CPI) in the world, countries like Germany or Georgia have a significant number of anti-corruption constitutional constructions without a single mention of “corruption” and “bribe” in their constitutions’ texts, while having a satisfactory CPI level. The constitutionalism idea provides for an anti-corruption platform anywhere it is implemented. This paper provides a very short demonstration of the correlation between a country’s perceived corruption level and its level of economic development and freedom. However, current instruments do not allow us to solve the question: can causation be found between the development of anti-corruption provisions in the fundamental law and the country’s position in the Corruption Perceptions Index by TI? This paper develops the concept of an Anti-Corruption Principle Development Index (ACPDI), which can help answer that question.