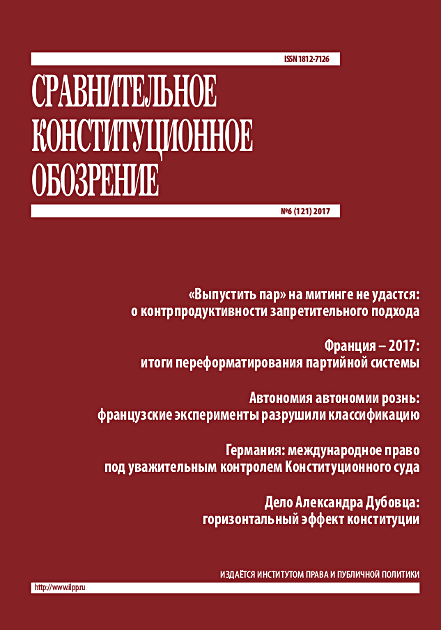 PARLIAMENTARY ELECTIONS IN FRANCE: AN ANALYSIS OF ELECTORAL STATISTIC

FREEDOM OF ASSEMBLY IN RUSSIA: SYSTEM DEFECTS OF LAW AND POLITICAL AND LEGAL PRACTICES

The 2011 elections to the Russian State Duma served as a catalyst for a massive protest movement that was critical to the acting political regime and that took the form of various public activities. This article considers the legal aspects of enforcing the freedom of assembly in the Russian Federation. An in-depth analysis of key issues regarding the application of the legislation on public activities is provided. These issues include: the unlimited discretion of municipalities in agreeing to the terms for conducting public activities; the opportunity to consider practically any expression of civil activity as an unsanctioned public activity; the ban on conducting public activities in places defined by the federal legislature and legislatures of the subjects of the Russian Federation; the excessive limits for organizers of public organizations; the excessive responsibility for violating the legislation on public activities; the impossibility of ensuring an effective protection for the right to conduct a public activity; and, finally, the fictitious criminalization of multiple violations for organizing public meetings.

ISSUES OF QUALIFYING AND DELIMITING POLITICAL AND ADMINISTRATIVE AUTONOMIES: THE EXPERIENCE OF FRENCH TERRITORIES

In this article, territorial autonomies are considered comprehensively in three dimensions: as a principle, as a form of territorial organization of the community, and as a legal regime. Territorial autonomies have four main elements: 1) a prevailing ethnic, cultural, religious, geographic, or otherwise unifying identity; 2) the establishment of unique competencies that differ from those of other entities of a similar size or type that are located within the state; 3) the guarantees of constitutional status for its development and defense; and, 4) the prevalence of financial resources for executing its duties. Examples of the constitutional and legal status of Corsica and the French overseas territories illustrate the problematic application of the dichotomous division of autonomies into political and administrative types. While by the polar examples (such as the autonomous regions of the People’s Republic of China, Gagauzia, and Greenland) the distinctions of autonomies in the matters of competence can be traced quite obviously, the use of this classification is complicated by considering Corsica or New Caledonia.

JUDICIAL STANDARDS IN RUSSIA AND GERMANY

THE PROTECTION OF SUBJECTIVE PUBLIC RIGHTS IN RUSSIA: UNIVERSAL STANDARDS OF ACCESS TO JUSTICE

Access to justice as a right, principle, and guarantee is the element of everyone’s right to judicial protection and the condition for its implementation is constitutional in nature and is recognized under international law as a fundamental human right. It is supported by international standards of access to the court as embodied in the European Convention on Human Rights, and is extensively developed in the case law of the European Court of Human Rights. This article examines the perceptions of these international standards in the Russian legal system, taking into account the provisions of the Russian Constitution and the interpretations of the Constitutional Court of the Russian Federation. The author’s view on universal standards of access to justice is proposed as a set of principles, guarantees, and criteria for access to judicial protection that is recognized at the international, supranational, and national levels of legal regulation. A classification of these standards is also given.

THE APPLICATION OF INTERNATIONAL LAW BY GERMAN COURTS

ON СONSTITUTIONALIZATION OF PRIVATE LAW

This article addresses the case of Aleksander Dubovets, which was reviewed by the Russian Constitutional Court in June 2017. The case concerns the revocation of title to an apartment and the subsequent eviction of a bona fide purchaser as a result of proceedings initiated by state authorities under Article 302(1) of the Civil Code of the Russian Federation. Indeed, the case was an important milestone in the Court’s 2017 case law. By the time Alexander Dubovets lodged his complaint to the Constitutional Court, hundreds of bona fide purchasers all over Russia had been stripped of home ownership, and since 2011 the European Court of Human Rights has decided dozens of similar cases in favor of bona fide purchasers of apartments. However, the Russian government failed to take any steps to protect these citizens. While agreeing with Judgment No.16-P of June 22, 2017, delivered by the Constitutional Court, the authors analyze the reasons that caused this crisis situation, and the factors contributing to its solution.

This article considers the relationship of the constitutional economic model and the real economic action of state authorities. Based on an analysis of materials from leading Russian economists, it can be concluded that the Russia has a semi-market economic model. Its main problems are excessive government intervention, the dominance of the public sector, the reduction of freedom of economic activity, and competitive beginnings. This situation is contrary to the important constitutional values of a socially oriented market economy. This article assesses the severity of such differences and raises issues about the ways in which this contradiction can be overcome. After assessing the role of the Constitution in search of a new economic model, this article proposes several possible approaches to implementing constitutional values in the economy.

IS THE LGBT COMMUNITY A “SOCIAL GROUP”? SOCIOLOGICAL CRITERIA FOR UNDERSTANDING COURT INTERPRETATIONS

Judges make use of expert knowledge in social science when interpreting a wide range of terms of a specific discipline – mentioned in statutes – in their rulings in order to ensure the implementation of the principles of the rule of law in the courtroom. One of these notions is the term “social group,” which is used by legislators to draft criminal law norms in respect to aggravating circumstances. This term is well known for sociologists who employ it to identify a group of people united by common interests. However, while interpreting this term in courts, judges face many troubles in identifying if a group of individuals should be considered to be a social group. The LGBT community (lesbians, gays, bisexuals, and transgender individuals) forms part of this trouble for judges. In courts of various levels in Russia, the LGBT community is not always recognized as a social group and sometimes this recognition is straightforwardly denied in court rulings.

HISTORY OF THE SOVIET PROJECT: DRAMA IN FIVE CONSTITUTIONS

The reviewed book covers the political, constitutional, and legal development of Russia and the USSR during the 20th century. The research goal is to create a retrospective reconstruction of the reasons and motives of the Russian Revolution and its mission, as well as the methods that were used. The original approach considers the Revolution as a process lasting several decades. The book does not consider the revolution to be a particular event that took place in 1917, but rather a long process that serves as a reaction to a specific social problem that it was supposed to solve. As a result of this approach, the considered period in the book extends from the beginning of the 20th century to the middle of the 1990s. The final act of this revolutionary century was the dispersal of the Supreme Soviet of the Russian Federation in 1993 and the introduction of a new Constitution, which the book’s author connects to the events of 1917.