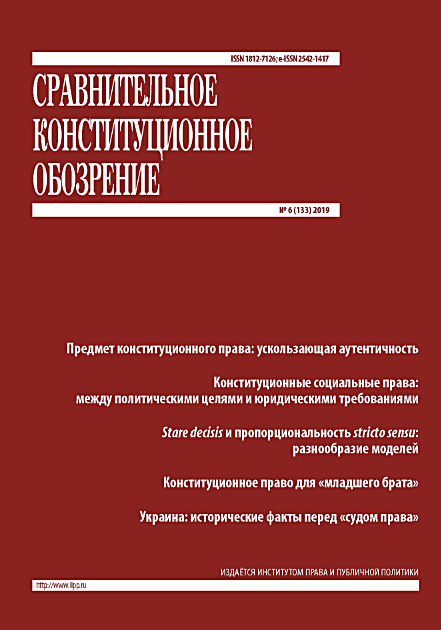 CONSTITUTIONAL SOCIAL RIGHTS AND THEIR JUSTICIABILITY

On the basis of a critical analysis of modern concepts of the object of constitutional law, the author presents her own concept. In accordance with it, the object of constitutional law covers two elements. The first element includes political relations originally intended to restrict the state power by means of putting it under the people’s control (mostly these are political relations within which public authorities are placed under the control of the people). The second element covers social relations of great importance to the society, which concern various spheres of life (economical, cultural, social, etc.). The author proves that those two elements of constitutional law subject are united, but not identical.

THE PRINCIPLE OF PROPORTIONALITY

The methodology of decision-making in complicated cases has become a kind of “Holy Grail” for legal science, in search of which remarkable efforts were made by many generations of scholars. The main expectant for the role of the sought-for method to be used in contemporary constitutional and international adjudication is the doctrine of proportionality that assumes the balancing of principles as an ultima ratio of legal justification. In light of such claims, it is interesting to examine the role of the doctrine of precedent. According to this doctrine in its horizontal aspect, the court should be bound by its own legal positions. This “typically English” legal idea is firmly established in common law countries and is usually considered in isolation from the “typically German” idea of proportionality, and the connection between them is difficult to assume due to the difference in their sociocultural origins. In addition, the doctrine itself does not seem clear enough to continental lawyers. However, this article provides a more optimistic view of the nature and role of case law.

THE CONSTITUTIONAL TURN: TOWARDS THE ANIMAL WORLD

The goal of this paper is to evaluate the phenomenon of the constitutionalization of animal welfare in selected foreign countries. This article covers some of the main problems of animal protection, including the objectives of this protection, and the methods for its implementation. The main objectives of this paper are to describe the definition of “animal protection” through a comparative analysis of legislative acts of foreign countries and to denote the existing prerequisites for the constitutionalization of animal welfare in Germany and Switzerland. Another objective of this study is to describe the process of incorporating provisions aimed at protecting animals into the constitutions of these states. The author also describes the typical constitutional values and attitudes to animals in the modern world on the basis of constitutions and other legislative acts of various states on the treatment of animals in various fields of human activity.

“TOWER OF BABEL”: A COMMENT TO THE PRACTICE OF AUTONOMOUS INTERPRETATION OF THE PROVISIONS OF THE EUROPEAN CONVENTION AND THE RUSSIAN CONSTITUTION

The genre of the present article can be classified as a commentary on the practice of the Constitutional Court of the Russian Federation and the European Court of Human Rights, devoted to an identical range of issues. Namely, such issues are the interpretation of the concepts of “family”, “marriage”, as well as the concepts of “possessions”, “property” used in the formulation of basic human rights. While in the first case we are talking about the so-called evolving rights, in the second case – about traditional rights: as a consequence, the approaches to the interpretation of these concepts are expectedly different. The main hypothesis is that the Constitutional Court of the Russian Federation, as the European Court of Human Rights, along with tools such as the evolving interpretation (the doctrine of the “living Constitution”) and others, uses the autonomous (constitutional) interpretation. The purpose of this interpretation is to identify the real meaning of the norms and institutions of the European Convention (Russian Constitution), which does not coincide with the meaning that was attributed to them by national legal systems (norms of ordinary legislation).

The article analyzes the judgment of the Constitutional Court of Ukraine, which ruled that the Law on the condemnation of communist and national socialist totalitarian regimes and the prohibition of the propaganda of their symbols complies with the provisions of the Constitution. A general description of the socio-political and intra-judicial atmosphere in which this decision was adopted is given. The conclusion is made that under the circumstances of global instability, constitutional judiciary in Ukraine had to turn to the historical arguments, sometimes exploiting these arguments.