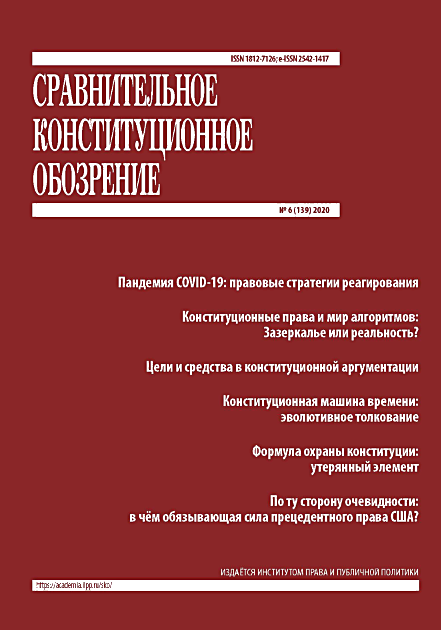 The doctrine of precedent being recognized as an inherent part of the American legal system provokes a permanent discussion about the sources and nature of its binding force. The scholars continually examine the correlation between common and written law, especially, the U.S. Constitution as its paramount form. Some authors given the absence of stare decisis doctrine in the plain language of the Constitution tend to believe that common law is not included in the supreme law of the land and therefore, judges should follow it as a matter of their discretion. Others suppose that the doctrine of precedent was implied by the Founders in the structure and understandings of key terms that makes it binding on the judiciary. This Article attempts to suggest another approach to such problem. Considering the nature of binding force and the methods of its attribution to a legal doctrine (basing on the recent case-law) we conclude that the obligatory status of the stare decisis doctrine derives from the will of the judiciary rather than people or the legislature. It is the judicial community who decided to treat a precedent as binding on each of them. This fact makes third parties believe that such a precedent would be applied in case of potential proceedings and therefore, act in accordance with it. The declared conclusion is supported by the examination of such legal mechanisms as appellate review and judicial discipline process which enforce the doctrine regardless of one’s subjective attitude – that is essential for a rule to be binding. These findings suggest that further examination of written law as a source of common law seems to be impractical and it would be more reasonable to focus on the role of the judiciary and their willingness to enforce the stare decisis doctrine in future.

Bickel A.M. (1962) The Least Dangerous Branch: The Supreme Court at the Bar of Politics, Indianapolis, IN; New York: The Bobbs-Merrill Company.

McCutchen P.B. (1994) Mistakes Precedent and the Rise of the Administrative State: Toward a Constitutional Theory of the Second Best. Cornell Law Review, vol.80, no.1, pp.1–42.

Phillips J.C. (2016) Is Stare Decisis Inconsistent with the Original Meaning of the Constitution?: Exploring the Theoretical and Empirical Possibilities. Notre Dame Law Review, vol.91, no.2, pp.115–127.

Tiedeman C.G. (1890) The Unwritten Constitution of the United States: a Philosophical Inquiry into the Fundamentals of American Constitutional Law, New York: G.P.Putnam’s Sons.