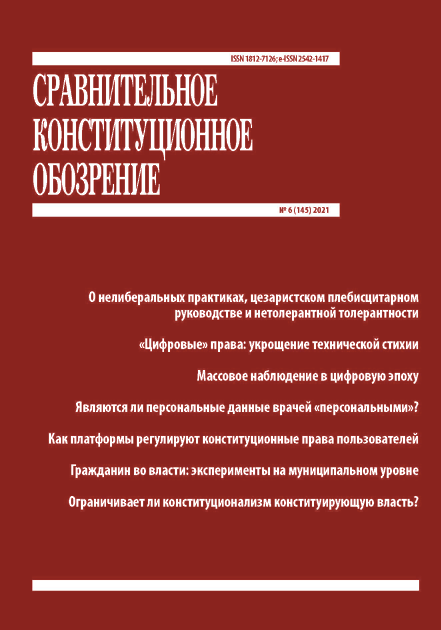 Рarticipatory democracy is usually analyzed in the context of modernization of the whole democratic system, considering the fact that social and political changes of recent decades and certain disappointments of the electorate in elections and the electoral process determine the necessity of wider citizens’ participation and the use of its new, more interactive forms. It is these forms that are intended to serve as a significant addition to traditional democratic mechanisms and contribute to the modernization of existing municipal systems. There is a rather complex and dialectical relationship between participatory and representative democracy, and the former serves not so much as an alternative but as an important complement to the latter, though being able to give it some competition. Participative democracy is based on timely and constant informing of the population, although information alone doesn’t enable citizens to automatically influence the decision-making process. This requires a whole range of instruments of participatory democracy implemented with the support of the population and various segments of civil society. Participatory democracy can be bureaucratic and sometimes unstable. Various forms of participatory democracy are often initiated by municipal authorities themselves, thus setting certain permissible limits on participatory initiatives and letting organized interests and pressure groups that have sufficient resources to subordinate individual democratic forms to their needs come to the fore. Civic participation sometimes thus becomes not so much a means of modernizing the political system and a channel for introducing innovations, but rather a management tool. At the same time participative democracy remains the most important instrument of socialization of the population and for its involvement in solving local issues, as evidenced by the growing interest of citizens in different forms of this type of democracy. Under the influence of common processes of Europeanization and the introduction of new public management, local democracy is adapting to new challenges and modern realities (even by trial and error), and the search is underway for new ways of its development, previously narrowed by a one-sided emphasis on representative democracy.

CONSTITUTIONAL PRACTICES IN TIMES “AFTER LIBERTY”

This chapter discusses the puzzle of illiberal practices as a constitutional problem. Illiberal rulers tend to gradually arrogate executive powers and secure their hold on elected office, while insulating themselves from the potential adverse legal consequences of their actions, in the manner of Caesaristic plebiscitary leadership. As a result, they restrict political competition and contestation, the plurality of the political community, and ultimately, individual liberty. The age of illiberal democracy is one “after liberty.” This chapter situates scholarship on illiberal constitutional practices in the broader context of scholarship on constitutionalism. Thereafter it takes stock of select illiberal constitutional practices affecting the electoral system, the legislature, the executive, the judiciary and the civil service. In closing, it explores the suppression of liberty and the chilling effect of illiberal practices that characterize times “after liberty”.

“Digital” rights have become a popular topic of the current legal research. Sometimes it appears that computer technology “acts” as an independent phenomenon, developing according to its own laws and beyond the control of humans. Yet, we should not forget that law as a regulatory framework still deals with relationships among human beings and not between humans and machines, or machines among themselves. The nature of these relations is changing, influenced by various factors, one of which is the level of technological development in general, and not only the one of information technologies (social factors). In this context, we can refer to the traditional concept of “material culture”, which denotes the totality of all artifacts, that is, objects created by humans. Social factors, whether related to technology or not, play on the same field and are therefore to some extent interchangeable. The set of social functions that must be performed in a society is definitive. When designing legal regime, it is necessary to understand which social function is influenced by a certain technological innovation, and to address not the use of a device or technological process itself, but rather this social aspect. The subject of social control remains the relationship among humans, changing to some extent due to the use of new technology. Legal control is possible in two main forms, differing in how compliance with the rules (imperatives) is managed: either in a centralized manner, by special public authorities, or by individual (private) actors. In the latter case, we talk about subjective rights. These (subjective) rights make it possible to distribute responsibility and initiative for the application of the rules of (objective) law between society and the State, which in certain cases is a preferable option compared to centralized regulatory regime.

CONFLICTS OF RIGHTS IN THE REGULATION OF ONLINE PLATFORMS IN RUSSIA

In this article, we will look at several legal conflicts arising from the regulation of online platforms in Russia. Legal conflicts can be understood as the difference between the legal nature of a phenomenon and the practice of its legal regulation. One legal conflict arises in relation to different jurisdictions if the platform is registered in a foreign jurisdiction. A second conflict reflects the difference between the public-law nature of constitutional rights and freedoms of users and the private-law nature of user agreements, for which a "civil" mode of public offer is established by default. In countries that have embarked on the path of strict regulation of the Internet, the guarantees established in user agreements do not practically result in respecting and protecting the constitutional rights and freedoms of users. User agreements will be analyzed in relation to internationally developed guidance documents - the User Agreements and Human Rights Guidelines of the Internet Governance Forum and the Manila Principles on the Responsibility of Intermediaries. A third legal conflict arises between restrictive measures introduced within the framework of Russia’s national legislation asserting the “sovereignty” of the Russian Internet, and human rights and the legitimate interests of users of social networks and other platforms, especially foreign ones, in relation to protection of their rights to access information on the Internet, as well as other rights and freedoms exercised via the Internet. The legal conflicts reviewed in this article can be resolved by maintaining the open and international character of the Internet, as this is the sole condition for realization of the human rights of Internet users in any country. This means it is impossible to regulate the Internet exclusively within the bounds of national jurisdiction. It is necessary to develop norms of international law regulating the Internet which are acceptable to most countries and which concern platforms’ user agreements and also intermediaries’ responsibilities.

SURVEILLANCE AND HUMAN RIGHTS: NEW RISKS IN THE DIGITAL AGE

Supervision as data collection is more likely to manifest itself in the digital era as surveillance which menaces the realization and protection of human rights. It is possible, and conventional, to divide surveillance depending on who is doing it – government or private companies. Another basis of division is mass or targeted surveillance. According to its coverage, surveillance may be internal (not exceeding the borders of the State) or external. In today's context, mass surveillance is not necessarily limited to secret services and national security. The grounds and motives for surveillance are constantly expanding (the most recent being the surveillance of coronavirus-infected persons), which only multiplies the risks of human rights violations. At the same time, even judicial attitudes toward mass surveillance have changed under the influence of the terrorism situation and other changes in the international arena (ECtHR judgement, Big Brother Watch and Others v. the United Kingdom). The problem is exacerbated when one considers that private companies can also carry out surveillance. From this point of view, there are no strict differences between State surveillance and private sector surveillance, and a feature of surveillance such as intrusion into privacy (Court of Justice of the European Union, Digital Rights Ireland and Seitlinger) is preserved in both of them. A modern approach to privacy protection should be based on the fact of the constancy (uninteruptedness) of surveillance carried out by both the State and private actors. Privacy protection in the digital age is built on the concept of Privacy by Design (privacy by default). However, in a mass surveillance environment, threats to privacy are unavoidable, so experts have proposed replacing Privacy by Design with Minimum Harm by Design. This approach may be explained by the Anglo-Saxon influence on the continental legal system. As risks to the right to equal treatment and nondiscrimination increase with the spread of surveillance, algorithm evaluation and certification can help in overcoming the risks of discrimination. In the digital environment, protection of human rights becomes even more important. Article 2 of the Russian Constitution assigns this function to the State, but the State tries to share it with the private sector and citizens themselves (meaning a number of private sector responsibilities to ensure data protection, attempting to recognize citizens’ «property rights» to personal data and free circulation of data). Consequently, the search for consensus and a balance of interests in this domain is relevant.

THE CONSITUTIONAL COURT OF THE RUSSIAN FEDERATION ON THE PROTECTION OF MEDICAL WORKERS’ PERSONAL DATA: RULING OF THE 25TH MAY OF 2021 NO. 21-P

The definition of the legal term “personal data” suggested by the Russian legislator is broad and vague. So is the definition of the right to privacy. Both terms are hard to define both logically and ontologically. According to the European Court of Human Rights’ approach, the right to the protection of personal data forms the foundation of the right to privacy. When the legal terms are defined broadly, it gets hard to protect them, especially in the era of digitalization. The 21st century is characterized by the blurring of the spheres of private and public life due to the vast use of digital technologies. The excessive blurring of these spheres creates more and more chances for breaches of the right to private life, and as a consequence, for breaches of the right to protection of personal data. This article makes a theoretical contribution by analyzing the evolution of private-public spheres applying historical and philosophical approaches. It analyzes the judgement of the Constitutional Court of the Russian Federation in relation to the public interest in medical personnel’s professional work, and demonstrates the narrowing of the boundaries of their right to privacy. The narrowing takes place by the Court’s extending the public figure doctrine to result in the classification of the doctors’ personal data as public information. The author criticizes this approach and shows a difference between the legal regimes for public information and for personal data that are published with open access due to federal law requirements and consent of the medical workers provided during the recruitment processes. The author suggests another approach to the protection of the personal data of doctors by defining such data as personal data allowed to be distributed to the public in consequence of the person’s entering into labor relationships.

LAW AND CONSTITUENT POWER: THE IDEOLOGICAL POOL AND ACHIEVEMENTS IN CONSTITUTIONAL JURISPRUDENCE